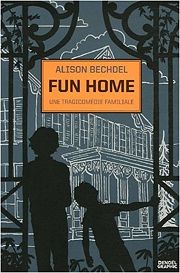 In this groundbreaking, bestselling graphic memoir, Alison Bechdel charts her fraught relationship with her late father. In her hands, personal history becomes a work of amazing subtlety and power, written with controlled force and enlivened with humor, rich literary allusion, and heartbreaking detail.

Distant and exacting, Bruce Bechdel was an English teacher and director of the town funeral home, which Alison and her family referred to as the “Fun Home.” It was not until college that Alison, who had recently come out as a lesbian, discovered that her father was also gay. A few weeks after this revelation, he was dead, leaving a legacy of mystery for his daughter to resolve.

Alison Bechdel’s coming of age tale is a difficult one. It was easy to sympathize with young Alison who must have been like a ship lost at sea. The coldness of her family home was palpable and mirrored that of the funeral home where her father worked. Other than being indentured servants to their father’s fastidious home decor projects, there were no signs of outright abuse, but the lack of affection would be enough to cause any child psychological problems. It would have been easy for Bechdel to paint her father as the patriarchal tyrant, but she manages to make him somewhat sympathetic. Her ability to find humor in an otherwise grim story and her wonderful artwork kept me wanting to read more.

For interviews with Alison Bechdel click here and here.