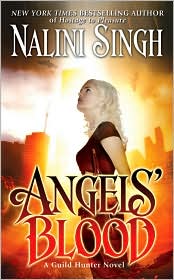 Vampire hunter Elena Deveraux is hired by the dangerously beautiful Archangel Raphael. But this time, it’s not a wayward vamp she has to track. It’s an archangel gone bad.

The job will put Elena in the midst of a killing spree like no other-and pull her to the razor’s edge of passion. Even if the hunt doesn’t destroy her, succumbing to Raphael’s seductive touch just may. For when archangels play, mortals break.

Nalini Singh has already cemented her reputation as a must read author with her Psy/Changeling series, but with Angels’ Blood, the first book in the Guild Hunter series, she’s sure to gain many new fans.

With a New York City backdrop, this first novel establishes a world in which Archangels rule, and vampires come to their call. It’s a nice twist on the vampire myth and the presence of angels, morally ambugious as they are in this book, tightens the tension and keeps things interesting.

The lead characters, Elena and Raphael, are dynamic individuals. It’s clear that Singh understands the importance of letting her characters show the reader who they are. And the secondary characters are often as pivotal to the story as the leads, which helps to more fully realize the world.

I have a feeling that Angels’ Blood is merely a tease. So much set-up was accomplished for the future of the series, and it shows wonderful potential. I thoroughly enjoyed this one, and I hope you pick up a copy when it’s released in March.