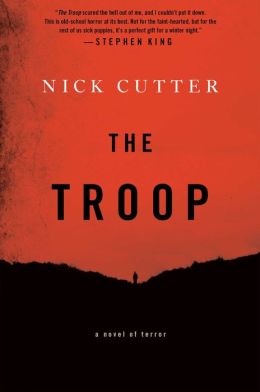 Five boys and their scoutmaster set off for a small Canadian island for some bonding, etc. Everything is going well until “Typhoid Tom” as he comes to be known comes ashore and events quickly spiral out of control. I bought The Troop because of all the positive feedback and I had already heard so much about it before it came out. After reading it, I’m still glad I bought it but it is definitely a disturbing book. For me, it brought to mind Lord of the Flies with more horror elements thrown in. As in some of the best horror books, worse than the actual “monster” or in this case mutated tapeworms, it’s the actions of the people that usually come to the forefront. In this case, the actions of the adults in this book brings to mind the worst of humanity. The five boys, except for one budding psychopath, actually come off more likeable despite being trapped with, after the beginning, no adult supervision, no communication, no care packages, etc. This despite being surrounded by military ships and helicopters. There are some deeply disturbing and explicit passages featuring what the boys and even some animals suffer which I confess I had to skim because they were just too grisly. All that said, I think this is unfortunately an extremely realistic story, and one that will give you nightmares. One thing I’d like to respectfully disagree with. Some reviewers have complained that this is more geared for the YA audience . I can see perhaps New Adults, but definitely not teenagers!