As someone who loves the swashbuckling fiction of authors like Alexander Dumas, Rafael Sabatini and Arturo Pérez-Reverte it seemed like reading a non-fiction work on war in the period the books are set in would be a good idea. 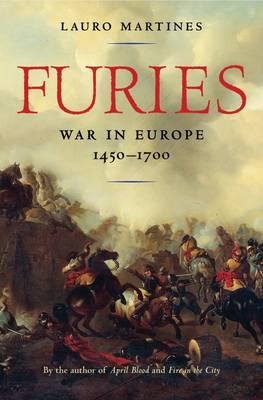 That is what brought me to Lauro Martines’ Furies: War in Europe, 1450-1700. The book came as a bit of a surprise. I had expected accounts of battles and the political machinations that made them happen. What I got was a book on the logistics of creating armies and the day to day lives of soldiers in early modern armies and the civilians that supported them (both willingly and unwillingly). In fact Martines goes out of his way to avoid discussions of the battles, politics and diplomacy that created wars in this time. This might turn off a person who really wants the action of a standard military history but the sense of depth and meticulousness Marines brought to his subject makes it fascinating.

This book covers a lot of territory. One of the features of the period between 1450 and 1700 that gets lost behind the study of that rebirth of art and science called the Renaissance is just how violent it was. In that 350 years, wars were fought continually across the length of Europe. There were the dynastic struggles between France and Spain in Italy during the 1400s (collectively if not imaginatively) called the Italian wars. The 1500s saw wars between Catholics and Huguenots for control of the French state called (again not surprisingly) the French Wars of Religion. The Seventy Years War for Dutch independence from Spain spanned the 16th and 17th centuries. And the whole thing seems to culminate in the Thirty Years War in the 17th century, nominally about religion in the German states but which grew to include territorial and dynastic disputes and sucked in every major European power. Those are just the big ones. There are dozens of small local conflicts with unique names like The Schmalkaldic War, Silken Thomas Rebellion and the Moldavian Magnate Wars just to name a few.

Martines starts by showing how princes created their armies. The constant warfare created a manpower shortage that in turn caused princes to use mercenary polyglot armies. One might find Spanish, Italian, Irish or English soldiers fighting in any army regardless of its nation of origin. Similarly, Protestant units fought for Catholic princes and vice versa. Which brings up another of Martines’s major themes, princes need for armies outstripped their ability to pay for them. Armies were created on credit and sooner or later ran out of money for supplies and then began preying on the inhabitants of the lands they passed through. Martines focuses closely on this adversarial relationship between soldier and civilian. Add to this soldiers could go for years without being paid and you have the makings of an unprecedented humanitarian disaster that would simply be ignored by Europe’s leaders.

I would happily recommend this book to anyone who wants to see the inner workings of an early modern army. However you might want to shy away from it if you are looking for the glories and intrigues of a standard military history.