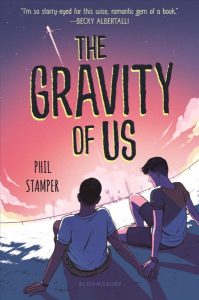 For many people, the stars are something we only happen to see when we chance a gaze up at the sky. Sure, they’re sparkly and may remind us of how small we are in this enormous universe, but unless you have a true interest in the exploration of space, a simple glance is all you happen to toss up to the sky now and then. But for Cal and Leon, their entire lives have been derailed in the name of space exploration — namely because their parents have just been selected to join the Orpheus V mission to Mars.

For Cal, this means giving up the life he’s grown used to in Brooklyn to travel half-way across the country to live in Houston, Texas so that his father can begin training for this mission. It means losing access to everything he’s come to know and love, namely his best friend Deb and the multitude of cassette tape pop-up stores that he browses in his free time. It also means that the following he has accrued as a would-be journalist for the social media app FlashFlame might evaporate into thin air, along with his hopes and dreams of working at an internship for Buzzfeed.

It’s a change that he’s reluctant to make and he feels the intrinsic need to return to his home — until he meets Leon, a fellow transplant to Houston, thrust into a new home much like himself due to his mother’s new job on the Orpheus V mission. The pair are quick to develop a friendship, bonding over the big move from their home, and what life is like now as they’re constantly hounded by the press.

As Cal starts to realize what Leon means to him, he must take into account what means more to him in life; a chance at fame and returning to Brooklyn, or a new and blossoming love that might take his life in a completely different direction than he had originally planned on.

This novel was well written, with Phil Stamper making strides to help the reader connect to the characters, particularly Leon who struggled with anxiety and his mental health throughout the story. Stamper managed to keep me invested in the lives of these characters, and had me rooting for happy endings for them all. If you wind up enjoying this novel as much as I did, please consider checking out Stamper’s newest book As Far as You’ll Take Me, which is out now.

Check the catalog for the availability of The Gravity of Us.