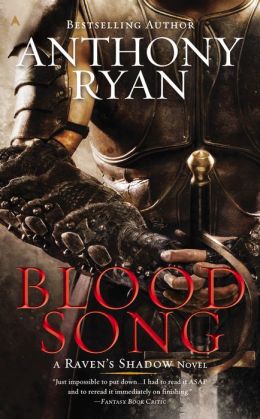 Let’s face it, magic schools where callow youth learn to be wizards and accidentally end up saving the world a few times are the bacon of fantasy literature – delicious but overused. We’ve Potter’d around Hogwarts, can Kwothe the University’s motto by heart, and have sampled the Coldwater showers at Brakebills Academy just to name a few. We’ve studied up on potions, rituals, inner powers, and more ‘mancies and ‘turgies than we can shake a wand at. It’s getting as old as a dusty parchment on a forgotten library shelf. We’re tired of waving our hands about in complicated, magical gestures. We need to shake things up.

We need to punch some people in the face.

Enter Blood Song by Anthony Ryan. In it, we meet Vaelin Al Sorna who at age ten is abandoned by his famous father at the gates of the Sixth Order. Unlike the posher schools we’ve grown accustomed to in fantasy literature, the Sixth Order specializes in one thing – fighting. They are the sword of the Faith, an Order of austere warrior monks along the lines of historical Knights Templar (or fantastical Night’s Watch). Vaelin rages against the father that placed him in the Order, but as the story plays out we learn that there may have been more behind his abandonment than an uncaring parent.

Ryan’s prose fits the story quite well – direct and to the point. We don’t get bogged down in world-building speechifying that seems to plague the genre. Better yet, Ryan knows how to write an action scene of which Blood Song has plenty. This is not to say the story is just almost 600 pages of punching or characters running through forests pursued by assassins – there’s a conspiracy to be unraveled and an unknown world to be explored as well. Ryan spends some time developing his cast of characters so that we actually care about why there are punching and wince when get punched back.

If you enjoy the historical fiction of Bernard Cornwell (Sharpe’s Rifles, Saxon Chronicles, etc), the Night’s Watch portions of George R.R. Martin’s Song of Ice and Fire series, or even the magical schooling stories bacon’d above, you’ll find a lot to like in Blood Song. The story is not as grim as Joe Abercrombie’s First Law Trilogy or Glen Cook’s Chronicles of the Black Company, but there certainly are no white knights or fairy tale endings to be found here. If you cut your teeth on Ranger’s Apprentice or Percy Jackson and are looking to get back into a fantasy adventure aimed at a slightly older audience, this book is a good place to start. Be warned, though, it’s a first book in a trilogy – the second book, Tower Lord, will be out in the summer of 2014 and the third, Queen of Fire, some time after that.

[Links will take you to the NOBLE catalog.]

One thought on “Staff Review: Blood Song by Anthony Ryan”