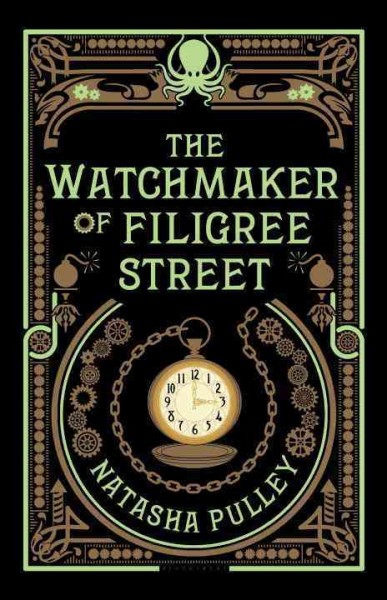 I admit I picked up this book because of the cover. I first saw it on the new book display by the circulation desk in the lobby (if you haven’t checked that display out you really should, there are a lot of gems there). And everything on the cover of The Watchmaker of Filigree Street has a connection to the story, which makes it even cooler. (Plus, it has really great endpapers.) This is Natasha Pulley’s first book, and it is a mixture of historical fiction and fantasy.

The story opens with Thaniel, a telegraphist at the Home Office in Whitehall in 1884, and his Lipton teabag. He lives a simple life divided mostly between the telegraph room in the Home Office, his flat, and the pub. His money goes to support his sister and her sons in Scotland. Then one day he inexplicably receives a strange watch. Six months later, the watch saves his life when Irish nationalists set off a bomb. He seeks out the watch’s creator and from there things really get interesting. The story then shifts back and forth between Thaniel, an Oxford physics student named Grace, and Japan in the 1870s. 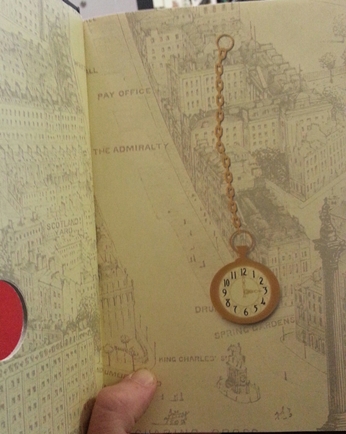 The cool endpapers (sorry about the thumb)

Although the book is a fantasy, the fantasy is laid on very lightly. It is also done very cleverly and will really make you think. I had a lot of ah ha! moments reading it. That also gives the story a lot of its twists and turns. Still, a lover of pure historical fiction could easily read this book and enjoy it. Pulley really gets into building the atmosphere of Victorian London. She pulls in major events like the Fenian dynamite campaign, the creation of a show Japanese village in Hyde park, and the newly opened London Underground. She also draws evenly on the technology of the time, describing the workings of telegraphs and clockwork mechanisms, which really gives the reader a feeling of being part of the world. In short, I loved this story and really hope Natasha Pulley writes more.