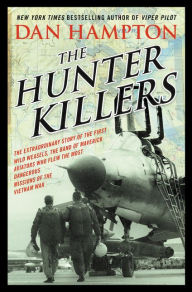 The Hunter Killers: The Extraordinary Story of the First Wild Weasels, the Band of Maverick Aviators Who Flew the Most Dangerous Missions of the Vietnam War – Dan Hampton

The Hunter Killers‘ prologue reads a bit like a combined manufacturer’s manual for a plethora of fighter aircraft, radar equipment and surface-to-air missiles. This pages-long deluge of technical details throws into stark relief Vietnam’s alliance with Russia and, in the face of new and developing weapons systems, the chink in America’s military armor. The prologue, drawing to a close, takes us into the sky with the first SAM launched against an American squadron of fighter jets in Vietnam; we see the last jet go down, and from that moment on, Captain Ross Fobair’s name is imprinted on our memories.

The first chapters switch gears to serve as a broad but salient introduction to the events that led up to the war, including background information on Kennedy and the Cuban Missile Crisis, and on Lyndon Johnson’s decision to chip away at (and subsequently inflame) the escalating conflict in Vietnam. Hampton handily informs those readers with limited knowledge of this particular war, and in a manner reminiscent of an engaging, laid back lecture delivered by a favorite professor. The narrative becomes even more conversational and well-informed when the perspective shifts focus to the servicemen who formed the Wild Weasels.

It needs to be pointed out that Hampton went forward with having The Hunter Killers published only after every surviving member of the original Wild Weasels had read a draft and provided feedback, and that determination to authentically capture their story shows. The dialogue, both spoken and internal, has undeniable urgency and rings true. Hampton doesn’t once let the reader forget that the men fighting this war were made of flesh and blood, with big, bold personalities and courage that wouldn’t quit.