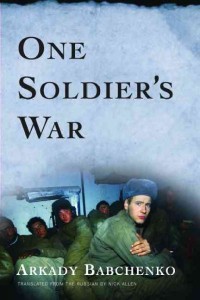 One Soldier’s War is the memoir of Babchenko’s service as an infantryman in the Russian army during the First and Second Chechen Wars in the 1990s. Both these wars grew out of attempts by Chechnya to break away from the Russian Federation. Fresh out of college, Babchenko was drafted into the army and sent to fight in the mountains of Chechnya, as well as urban centers like Grozny. In a sense the book reads a little like All Quiet on the Western Front. It is an extremely local experience of the war. He provides almost no larger context behind the wars or the progression of the wars. It is a day to day account of the hardship and suffering faced by Babchenko and his comrades, as well as the hardship and suffering they inflicted on the Chechens.

The book takes the form of short chapters that contain often stand-alone stories of Babchenko’s time as a soldier. It has the feel of a person setting there telling you a war story. There is no sense of chronology or passage of time. This gives the reader a feel for being there. You are there with Babchenko while he tries to find a Chechen sniper that is hiding somewhere in a building with him. Or scavenging for food, because the Russian army isn’t very good a resupplying their solders. Or getting beaten up by the older soldiers who prey on the younger soldiers.

This would be a good book for someone who loves stories. It would also be a good book for someone who wants to read about the day to day lives of soldiers. I’d recommend it to someone who’s read a lot of war memorials who wants something a little out of the ordinary as far as setting is concerned. As I mentioned above, someone who liked All Quiet on the Western Front would enjoy the gritty detail of the story. My only two quibbles about this book are 1) I wish it had pictures and 2) I wouldn’t recommend it for anyone who’s looking to understand the larger history of the First and Second Chechen Wars.