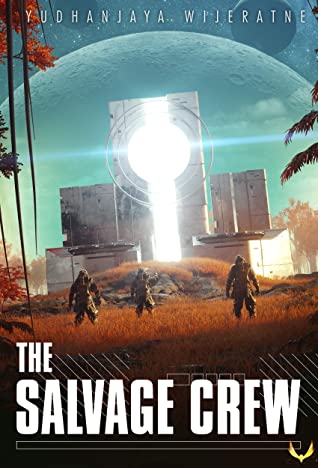 After finishing a reread of Martha Wells’ Murder Bot Diaries series I was looking for something similar to read. You may not know this but the library has access to a program that helps you pick new books to read: Novelist. I availed myself of its services and it suggested among other things The Salvage Crew. The book is not available in our network but we would be happy to get it via interlibrary loan. This book is an interesting blend of hard sci fi, psychological thriller and maybe even a little literary fiction. A salvage crew is sent to a planet to excavate a wrecked colony ship. The crew consists of three humans who are totally un-suited to the task and their overseer an AI named Amber Rose. Amber Rose narrates most of the story which is one of the biggest appeals.  Amber Rose is a poet in it’s spare time and the book is interspersed with poems as well as anecdotal asides that fill out the world the characters inhabit. Things on the planet go wrong from the beginning when the landing pod (which is Amber Rose’s body) lands in the wrong spot. The characters are forced to fight local fauna, technologically augmented humans, each other and a strange force they don’t really understand. The tone shifts back and forth between the humorous, Amber Rose sending poems to some of the animals on the planet, and creepy, there appear to be strange structures on the distant horizon that shouldn’t be there. The setting of the planet is vividly described. As are the struggles of the crew and the AI. Through all this the ending is deep and thought provoking. Added bonus if you can find it as an audiobook it’s read by Nathan Fillion of Firefly fame. Sadly its not available as an audiobook on either Hoopla or Libby. I would definitely recommend this to lovers of James Corey’s Expanse series.