If only letters – written, sent with a stamp cornered at a crooked angle – were still a thing. As they are sadly not, instead of out of mailboxes, I’ve been pulling off of shelves piles of books crammed with page after page of posthumously published letters, the latest being Anne Sexton’s, as compiled and contextually annotated by her eldest daughter and a close friend.

Born and raised in Massaschusetts, Sexton was a Pulitzer Prize winning poet, who struggled with depression throughout her life. She committed suicide in 1974, at the age of 46. Many of her letters confront her illness, some with a touch of mania that she was also well aware of and painfully quick to call herself out on. These letters are saturated with unslanting honesty, so many marked by flaws she pointed to as though they were brightly dressed people in a crowd, and yes, I’ve found them difficult at times to read. Her words are raw, often effusive, unapologetic even when she’s apologizing.

Also of interest to me was her connection to Robert Lowell, whose letters I’ve previously consumed with slow, thoughtful relish. Sexton, along with Sylvia Plath, studied under Lowell, and the letters she wrote during that time are peppered with his name. I’ve just now begun the portion of Self-Portrait that sees Sexton gaining widespread ground in her field, with what would be her first book of poems, To Bedlam and Part Way Back, in Houghton Mifflin’s hands. 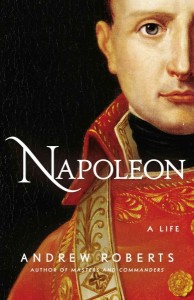 Napoleon: A Life by Andrew Roberts

My eye has been fixed on this nearly 1,000 pages-long doorstopper since it first released in hardcover last year, but it wasn’t until its recent publication in trade (oversized) paperback that I stopped staring in favor of bending at the knees to pick up the book.

I’m not going to lie, to say that I’ve been charging forward at great speed when, really, I’ve only just found my way into the first chapter after reading the fairly lengthy Introduction. Roberts took that time to position himself on the pro-Bonaparte side of the board, and to relate miscellanea (perhaps don’t compare Napoleon to Hitler, not in these parts) that will be revisited in greater detail as the book progresses.

Now, I’ve made it through Napoleon’s birth, and have been reassured that the name was not so odd a choice, if only because Machiavelli said so. (One of N’s great-uncles hopefully thought it was rather nifty too, as the moniker stuck to him first.)

…and that’s about it. So far. I’m going to approach this one in between other books, perhaps in between the chapters of other books. (Hurrah! to those who decided to pursue it cover to cover in one long swoop.)