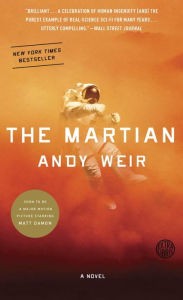 If it weren’t for the big-budget movie starring Matt Damon that just came out*, I don’t think Andy Weir’s The Martian would be flying off the shelves as much as it has – but that’s kind of a shame, really, because it’s super (ridiculously) good. And not just good in a hard sci-fi kind of way where you’re already kind of enthralled by NASA and interested in Mars and always maybe wanted to be an astronaut when you grew up. It’s good in the way a spy thriller is good or an adventure story is good – good where there’s a clear good guy vs. bad guy thing going on and there’s a nail-biting chase scene (or three) and you’re not JUST rooting for the bad guy to fail, you’re actually rooting for the good guy to win.

For me, books like The Martian don’t come around very often: books that make me bark out peals of laughter, put off watching TV (admittedly, my favorite thing to do), and keep me up way past my bedtime so that I can finish just one more paragraph (okay, fifteen). A book that fills my mind so that the seconds tick by into minutes, fifteen minutes roll into thirty, and one hour somehow becomes four…hours where I’m sitting and then lounging and then stretching, all to feed the insatiable need of omg what is happening i need to know how this ends. (If I could somehow read at the edge of my seat then that’s what I was doing for, like, ninety percent of this book.) I knew that I would enjoy The Martian, but I didn’t anticipate just how much this book was going to win me over. (Kind of how Netflix thinks I’ll rate a Gritty Crime Drama with an Engaging Female Lead four stars and I’m like, “Why would I watch that, Netflix?” and then I watch it and give it four stars. (Because Netflix just knows, okay??? So let’s pretend that I’m Netflix and I just know.))

You don’t need to know a whole lot about this book before going in – namely because Weir’s fearless protagonist Mark Watney spells it out in literally the first chapter of the book – but I suppose it’s helpful to know that Watney is an astronaut presumed dead and, as a result, left stranded on Mars. So, basically, the entire book is various forms of “Way to go, Mark!” and “Have fun, Mark!” and “So glad you’re not dead, Mark!” except Mark is saying this all to himself because he’s the only human being on an entire freaking planet and he doesn’t even have a robot for company.

Basically, The Martian is sarcastic and smart and nail-biting and laugh-out-loud funny and I wish you would just read it already because this review is turning out useless. (You’ll like it, though, I swear.)

For another take on Weir’s The Martian, read Chris’ review.