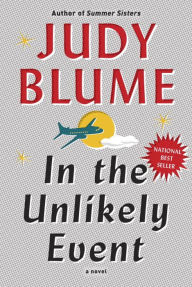 When Miri was fifteen, and in love for the first time, a succession of airplanes fell from the sky, leaving a community reeling. Against this backdrop of actual events that Judy Blume experienced in the early 1950s, when airline travel was new and exciting and everyone dreamed of going somewhere, Blume imagines and weaves together a haunting story of three generations of families, friends, and strangers, whose lives are profoundly changed by these disasters.

Did you know that Judy Blume is, like, the OG of young adult authors? I knew that, even though somehow I never read one of her (20+!) books growing up. Maybe that’s why I had such high hopes about In the Unlikely Event, and maybe why I felt so disappointed after finishing it – she’s Judy Freakin’ Blume. There is a GIF of her kayaking down a river of words on her website! She intervened when that husband gave away his wife’s 24-year-old copy of Are You There God? It’s Me, Margaret!! Anything she writes should be awesome-sauce!!!

So when I heard that she was publishing an adult novel, I got excited to jump on the Judy Blume Train and have my first Judy Blume Transformative Reading Experience™… and then I started reading In the Unlikely Event and it became a slog through flat characters and superfluous details.* ☹ There were just too many characters and plot threads – spiraling off into who cares and what the heck is going on and why is this character never mentioned again – packed into a 400-page book with one omniscient voice that couldn’t inflect or modulate its tone. I’m definitely sure that In the Unlikely Event was an updated example of the Adolescent Coming of Age trope found pretty much everywhere (in every time), but I’m only kind of sure it was supposed to be about Miri, Blume’s teen stand-in to the real events she both experienced and then fictionalized for the book. Because there’s, like, twenty-five characters who get POV chapters but only about five who get the lion’s share but then most of them relate to Miri some way except when they don’t….(Do you see my problem here???)

Miri’s a good narrator: she’s reliable and self-assured, but still in that questioning place where “what does it mean to exist in a world that doesn’t always make sense?” seems less twenty-something apathy and more a genuine grapple with existentialism. From her perspective, having a succession of plane crashes be the driving force of the novel is understandable. Being fifteen is hard enough without external motivators; add in trauma and grief and love and hormones and suddenly aviation mishap (which every single summary mentions, btw) transforms into a pretty interesting inciting incident. But without that? Without Miri’s particular view of what’s happening? In the Unlikely Event becomes a slow crawl through Blume’s failed attempt at writing multiple perspectives – her lack of plot induces boredom, her plethora of characters merit confused head-scratching, and her fictional doppelganger’s existential angst gets lost in the shuffle of Blume mentioning everything in lieu of missing anything.

“Wish me luck,” Kathy said. “I’m going to call home now.”
“Good luck.”
Kathy went out to the pay phone in the hall to dial her parents.

Because I need to know that “call home” means picking up a phone receiver and dialing a number??

They changed into their nightgowns, leaving their underwear since they weren’t going to sleep for hours.

Because knowing a character’s underwear situation is imperative to the plot???