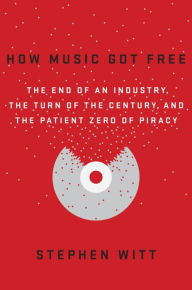 Jen’s comments: Just read this and loved it.  Fascinating read for anyone who’s ever scoffed at the price of music CDs.  Like the reviewer suggests, I’m really hoping for a movie.

“The story of how the Internet brought the imperious music business to its knees has never been told more succinctly and readably than it is here. Beginning his narrative in 1995, when the compact disc format reigned, Stephen Witt focuses on the transformative importance of four primary figures. They are Karlheinz Brandenburg, developer of the MP3 compression technology that enables the vast amount of digital sound data on a CD to be “squeezed” down to a more manageable size for easier playback and transfer; Doug Morris, the aggressive and musically adventurous head of Universal Music Group who presided over the volcanic rise of rap music; Bennie Lydell “Dell” Glover, an hourly worker at a CD manufacturing plant in North Carolina who sneaked thousands of copies of superstar albums out of the plant to post on the Internet before they were released for public sale; and “Kali,” a shadowy presence who, through a network of leakers like Glover, masterminded the Internet distribution of this enormous trove of pirated music.

The tragic flaw of the record companies—Morris’ chief among them—was believing they could ignore culture-shattering technology. After all, CD duplication had advanced to the point that they could manufacture albums for a few pennies each and sell them for $16.98 and up. Who’d want to disrupt such a cozy setup? So instead of coming to terms with this new world, the record labels fought back—quite ineffectually—with public relations campaigns and lawsuits against individuals, seeming like bullies every time they won. The upshot is that record stores have all but vanished and the CD is a withering format.

While Witt streamlines his account, he doesn’t oversimplify it. He covers the creation of iTunes and the iPod, the expansion of broadband, the brief but flamboyant life of Napster, Steve Jobs’ futile attempts to hire Morris and the wily Morris’ ability to prosper even as the empire he built crumbles. How Music Got Free cries out for a movie treatment like The Social Network.”