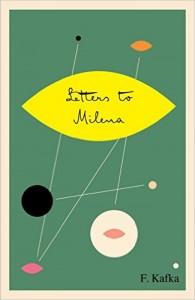 I met Franz Kafka over the body of a giant insect. It was, years upon years ago, an inauspicious introduction. And first impressions being what they are–misleading, mostly–I veered away from a second encounter, slipping quickly past the K’s (or the PT 2620’s, here) with downcast eyes. Then, well, then my epistolary leanings pitched me in the direction of Letters to Milena. The general lesson here is forgive a man his insect-related metaphors, because his letters are not to be missed.

From Vienna, where she lived with her husband, Milena Jesenská worked on the translation of Kafka’s fiction from his German to her native Czech. Ever ambivalent about the state of his writing once it was gone from his desk, Kafka was nonetheless appreciative of her efforts, and threw himself into a frankly hugely impressive, devoted correspondence that lasted just three years.

I’m tucked in tight with the letters from that first year, and here’s something I never would have guessed: Kafka was sweet and charming. If the words he shares to ease and soothe and captivate Milena are any indication, that charm came easily, effortlessly to him. Perhaps because he was enraptured with the recipient of these letters; perhaps because his tuberculosis-stricken life demanded a brighter, flame for the moth to flit to nature. Whatever it was, after slipping into the stories of everyday life and consolation he sent to her, I didn’t want to stray from the pages. They’re too few as it is.

There are more books of letters – Letters to Ottla and the Family; Letter to the Father; Letters to Friends, Family, and Editors; and Letters to Felice – and I will be reading each collection in turn, if only to see that charm extended, to determine if Kafka was that amusing, or if, and this would be to my utter delight, the humor threading throughout was unintentional. 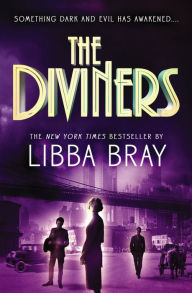 What can I say except it’s easy to linger in the 1920s. I finished Zeitz’s Flapper and, still in the mood for the glitz and easy come, easy go glamour of New York in the roaring twenties, plunged into the stacks to scoop up Libba Bray’s The Diviners.

The gist: A once smashing then slumping party is nothing but fun and games until its panicked hostess takes the Ouija board from the closet and someone’s eyes get poked out. (Literally, at that, chapters later.*) Which is to say: With this lengthy young adult novel, Bray weaves together historical and paranormal fiction, and to haunting effect.

The amount of research that went into this novel is evident from the jump, and therein lies the slight issue I (so far) have with the book: The jargon and archetypes and actual famous names that intimately belong to the 1920s are packed tight in the story, so much so that it could almost be mistaken for embellished non-fiction. It could almost be overwhelming. Flip that coin and it could be said that the novel’s tone–the atmosphere and setting–is spot-on. The characters, and there are a lot of them, are by and large compelling, and I wouldn’t say no to a quick visit to The Museum of American Folklore, Superstition, and the Occult. And if all goes well here, there’s more to the story in Lair of Dreams.

*Concerned parties should be reassured that this does not happen on the page.