Thanks to Lumberjanes and Ms. Marvel NOW! – which I tore through in hours – my love of graphic novels has exploded tenfold. Below are some of the current releases (and also some classics) that I’ve added to my TBR* pile within the last year. – Rachel 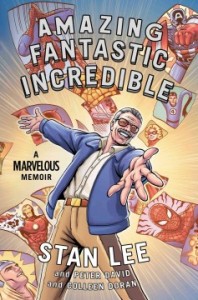 Amazing Fantastic Incredible: A Marvelous Memoir by Stan Lee and Peter David
“In this gorgeously illustrated, full-color graphic memoir, Stan Lee–comic book legend and cocreator of Spider-Man, the X-Men, the Avengers, the Incredible Hulk, and a legion of other Marvel superheroes–shares his iconic legacy and the story of how modern comics came to be. Stan Lee is a man who needs no introduction. The most legendary name in the history of comic books, he has been the leading creative force behind Marvel Comics, and has brought to life–and into the mainstream–some of the world’s best-known heroes and most infamous villains throughout his career. His stories–filled with superheroes struggling with personal hang-ups and bad guys who possessed previously unseen psychological complexity–added wit and subtlety to a field previously locked into flat portrayals of good vs. evil. Lee put the human in superhuman and in doing so, created a new mythology for the twentieth century. In this beautifully illustrated graphic memoir–illustrated by celebrated artist Colleen Doran–Lee tells the story of his life with the same inimitable wit, energy, and offbeat spirit that he brought to the world of comics. Moving from his impoverished childhood in Manhattan to his early days writing comics, through his military training films during World War II and the rise of the Marvel empire in the 1960s to the current resurgence in movies, Amazing Fantastic Incredible documents the life of a man and the legacy of an industry and career.” 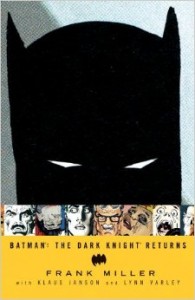 Batman: The Dark Knight Returns by Frank Miller
“It is ten years after an aging Batman has retired and Gotham City has sunk deeper into decadence and lawlessness. Now as his city needs him most, the Dark Knight returns in a blaze of glory. Joined by Carrie Kelly, a teenage female Robin, Batman takes to the streets to end the threat of the mutant gangs that have overrun the city. And after facing off against his two greatest enemies, the Joker and Two-Face for the final time, Batman finds himself in mortal combat with his former ally, Superman, in a battle that only one of them will survive. This collection is hailed as a comics masterpiece and was responsible for the launch of the Batman movies.”

Bitch Planet, vol. 1: Extraordinary Machine [http://evergreen.noblenet.org/eg/opac/record/3696261] by Kelly Sue DeConnick
“In a future just a few years down the road in the wrong direction, a woman’s failure to comply with her patriarchal overlords will result in exile to the meanest penal planet in the galaxy. When the newest crop of fresh femmes arrive, can they work together to stay alive or will hidden agendas, crooked guards, and the deadliest sport on (or off!) Earth take them to their maker?” 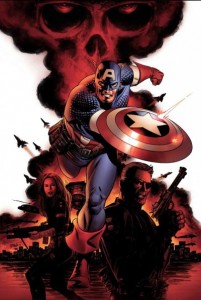 Captain America: Winter Soldier by Ed Brubaker
“For more than 50 years, the Soviets employed an undercover agent – an unstoppable, untraceable killer known as the Winter Soldier – to assassinate key political figures in the West. His suspected identity? Bucky Barnes, Captain America’s one-time partner, thought to have been murdered in the closing days of World War II.”

Filmish: A Graphic Journey Through Film by Edward Ross
“Cartoonist Edward Ross uses comics to illuminate the ideas behind our favorite movies. In Filmish, Ross’s cartoon alter ego guides readers through the annals of cinematic history, introducing some of the strange and fascinating concepts at work in the movies. Each chapter focuses on a particular theme—the body, architecture, language—and explores an eclectic mix of cinematic triumphs, from A Tripto the Moon to Top Gun.”

Giant Days, vol. 1 by John Allison
“Susan, Esther, and Daisy started at university three weeks ago and became fast friends. Now, away from home for the first time, all three want to reinvent themselves. But in the face of hand-wringing boys, “personal experimentation,” influenza, mystery-mold, nu-chauvinism, and the willful, unwanted intrusion of “academia,” they may be lucky just to make it to spring alive. Going off to university is always a time of change and growth, but for Esther, Susan, and Daisy, things are about to get a little weird.” 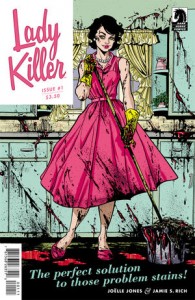 Lady Killer by Joëlle Jones and Jamie S. Rich
“Josie Schuller is a picture-perfect homemaker, wife, and mother–but she’s also a ruthless, efficient killer! She’s balanced cheerful domestic bliss with coldly performed assassinations, but when Josie finds herself in the crosshairs, her American Dream life is in danger! A brand-new original black comedy series that combines the wholesome imagery of early 1960s domestic bliss with a tightening web of murder, paranoia, and cold-blooded survival.”

Nimona by Noelle Stevenson
“Nimona is an impulsive young shapeshifter with a knack for villainy. Lord Ballister Blackheart is a villain with a vendetta. As sidekick and supervillain, Nimona and Lord Blackheart are about to wreak some serious havoc. Their mission: prove to the kingdom that Sir Ambrosius Goldenloin and his buddies at the Institution of Law Enforcement and Heroics aren’t the heroes everyone thinks they are. But as small acts of mischief escalate into a vicious battle, Lord Blackheart realizes that Nimona’s powers are as murky and mysterious as her past. And her unpredictable wild side might be more dangerous than he is willing to admit.” 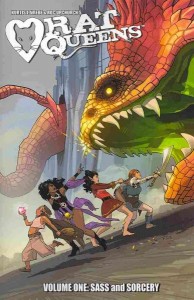 Rat Queens, vol. 1: Sass and Sorcery by Kurtis J. Wiebe
“Who are the Rat Queens? A pack of booze-guzzling, death-dealing battle maidens-for-hire, and they’re in the business of killing all god’s creatures for profit. It’s also a darkly comedic sass-and-sorcery series starring Hannah the Rockabilly Elven Mage, Violet the Hipster Dwarven Fighter, Dee the Atheist Human Cleric and Betty the Hippy Smidgen Thief.”

Rosalie Lightning by Tom Hart
“ROSALIE LIGHTNING is Eisner-nominated cartoonist Tom Hart’s beautiful and touching graphic memoir about the untimely death of his young daughter, Rosalie. His heart-breaking and emotional illustrations strike readers to the core, and take them along his family’s journey through loss. Hart uses the graphic form to articulate his and his wife’s on-going search for meaning in the aftermath of Rosalie’s death, exploring themes of grief, hopelessness, rebirth, and eventually finding hope again. Hart creatively portrays the solace he discovers in nature, philosophy, great works of literature, and art across all mediums in this expressively honest and loving tribute to his baby girl. Rosalie Lighting is a graphic masterpiece chronicling a father’s undying love.” 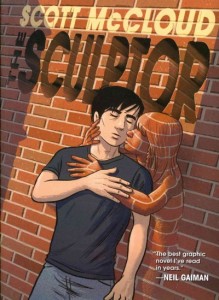 The Sculptor by Scott McCloud
“David Smith is giving his life for his art–literally. Thanks to a deal with Death, the young sculptor gets his childhood wish: to sculpt anything he can imagine with his bare hands. But now that he only has 200 days to live, deciding what to create is harder than he thought, and discovering the love of his life at the 11th hour isn’t making it any easier! This is a story of desire taken to the edge of reason and beyond; of the frantic, clumsy dance steps of young love; and a gorgeous, street-level portrait of the world’s greatest city. It’s about the small, warm, human moments of everyday life…and the great surging forces that lie just under the surface. Scott McCloud wrote the book on how comics work; now he vaults into great fiction with a breathtaking, funny, and unforgettable new work.”

Smile by Raina Telgemeier
“Raina just wants to be a normal sixth grader. But one night after girl scouts she trips and falls, severely injuring her two front teeth. What follows is a long and frustrating journey with the on-again, off-again braces, surgery, embarrassing headgear, and even a retainer with fake teeth attached. And on top of all that, there’s still more to deal with: a major earthquake, boy confusion, and friends that turn out to be not so friendly. Raina’s story takes us from middle school to high school, where she discovers an artistic voice, finds out what true friendship really means and when she can finally smile.”

Soppy: A Love Story by Philippa Rice
‘Soppy’ is Philippa Rice’s collection of comics and illustrations based on real-life moments with her boyfriend. From grocery shopping to silly arguments and snuggling in front of the television, ‘Soppy’ captures the universal experience of sharing a life together and celebrates the beauty of finding romance all around us.” 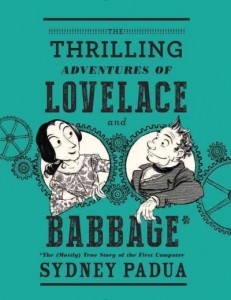 The Thrilling Adventures of Lovelace and Babbage: The (Mostly) True Story of the First Computer by Sydney Padua
“With interesting & curious anecdotes of celebrated and distinguished characters fully illustrating a variety of instructive and amusing scenes; as performed within and without the remarkable difference engine. Embellished with portraits and scientifick diagrams.”

Trashed by Derf Backderf
“Every week we pile our garbage on the curb and it disappears—like magic! The reality is anything but, of course. Trashed, Derf Backderf’s follow-up to the critically acclaimed, award-winning international bestseller My Friend Dahmer, is an ode to the crap job of all crap jobs—garbage collector. Anyone who has ever been trapped in a soul-sucking gig will relate to this tale. Trashed follows the raucous escapades of three 20-something friends as they clean the streets of pile after pile of stinking garbage, while battling annoying small-town bureaucrats, bizarre townfolk, sweltering summer heat, and frigid winter storms. Trashed is fiction, but is inspired by Derf’s own experiences as a garbage­man. Interspersed are nonfiction pages that detail what our garbage is and where it goes. The answers will stun you. Hop on the garbage truck named Betty and ride along with Derf on a journey into the vast, secret world of garbage.”

Watchmen by Alan Moore
“This stunning graphic novel chronicles the fall from grace of a group of superheroes plagued by all too human failings. The concept of the super hero is dissected and inverted as strangely realistic characters are stalked by an unknown assassin. Originally published as a 12 issue series in 1986 and 1987, WATCHMEN remains one of DC Comics’ most popular graphic novels.”