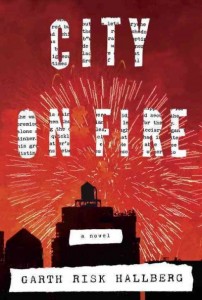 City on Fire is a behemoth of a novel – clocking in at over 900 pages – but it feels overwrought and excessive, as if author Garth Risk Hallberg simply wanted the world to know that he was capable of writing such an opus. The core action – which spans about seven months in 1977 – fails to juggle its own story, dragged down by the weight of twice as many characters and three times too many plots and sub-plots and “enough already” detailed character histories and sub-sub-plots. Sarah Churchwell of New Statesman writes that “City on Fire is not bad, but it also is not great,” which is unfortunate only because it’s true. For a debut that fetched a whopping two million in a two-day bidding war among eight to twelve publishers (depending on who you believe), and was compared to both Roberto Bolaño’s 2666 and Don DeLillo’s Underworld – but perhaps should also share company with David Foster Wallace’s Infinite Jest – City on Fire should have been both commercially and critically spectacular (like, say, The Girl on the Train or Between the World and Me). In reality, the New York Post cited the book as “a steaming pile of literary dung.” (No, really.)

The only thing I knew about Hallberg’s novel was what sold me in the first place, that “City on Fire is a postmodern epic in the vein of…2666. Beginning with a mysterious shooting in Central Park and culminating in the real-life New York City blackout of 1977, Hallberg weaves a complex story with an ensemble cast. The book’s seven parts are divided by and interspersed with letters, news clippings and images, similar in form to Marisha Pessl’s Night Film.” (via Literary Hub) But Hallberg doesn’t quite capture what I loved most about 2666 – the dense, intellectual prose from both the novel’s characters and its author; the competing narratives that don’t really seem like they connect until suddenly they do; and the overwhelming need to start the book again after I’d finally finished its 898 pages. City on Fire’s main characters seem too perfect, their prose too thought-out and pretentious; and the text was mentally taxing to wade through until I could finally arrive at the “culminating” thread holding everything together – a whopping five or six hundred pages in.

Hallberg’s attempt to pen The Next Great American Novel™ was a noble attempt, but ultimately a failed one. Instead of just stating what we need to know to understand a narrative arc which he explicitly wants us to know takes place immediately before and during the summer of 1977, Hallberg explains – in great detail, mind you – what happened to our characters before said dates and then what happened to our characters before before said dates. The backstory that, say, Hamilton* fits into four minutes (about 3% of the show), Hallberg manages to stretch over about five hundred pages (more than 50% of the novel).

If you’re into white dudes proselytizing about their epic, multi-year struggle to write the definitive book of their generation, give City on Fire a go. Otherwise, skip it. It’s not worth the months it will take just to say you’ve read it.

*I’m obsessed, okay? I know this. I am okay with this.