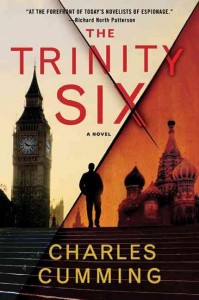 is a modern spy novel that hangs on the search for the fabled Sixth Man. In the 1930s, the NKVD (the predecessor to the KGB) recruited five spies at Trinity College, Cambridge. Now known as the Cambridge Five, these individuals– Kim Philby, Donald MacLean, Guy Burgess, Anthony Blunt and John Cairncross– went on to have successful careers in English foreign office, MI6 and MI5. Anthony Blunt even had close familial ties to the British royal family. All the while they passed classified information to their Soviet handlers until they were gradually exposed over the course of the latter half of the 20th century. Ever since their exposure there has been a theory that there was a sixth spy that was never exposed.

This is where Cumming’s novel takes up. Sam Gaddis is a professor of Russian history at University College London. He learns from a journalist friend that she has stumbled on a source that is going to give her the sixth man. Almost immediately after, though, she is murdered. Gaddis, in desperate need of money, takes up the challenge of locating the sixth man. However, in so doing he brings on the full fury of both British MI6 and the Russian FSB (successor to the KGB).

This is a story that combines action and research. Gaddis spends much of the book combing through libraries and archives trying, at first, to determine the identity of the sixth man, but eventually to try and determine why this research is so dangerous. All along the way the reader is putting the pieces together along with him. As Gaddis gets closer, and more people start dying, he is forced to dodge FSB hitmen and in some cases MI6 agents.

Gaddis is a great character who combines just the right amounts of nobility and debasement. He is divorced from his wife, he drinks too much and is deeply in debt. On the other hand he is very loyal to friends, devoted to his daughter, and determined to see justice in a Russia led by a character that is a thinly disguised Putin. He is also extremely intelligent and gradually takes to the life of espionage that his work drives him into.

At the same time the setting is drawn with a great attention to detail. As Gaddis moves across England, Europe and Russia in his search, Cummings gives you enough detail of the places that you feel like you are there with Sam on his search. From the specific shops in Winchester High Street that Gaddis walks by to a particular gastropub that is serving as a meeting place in Vienna or a rundown tenement in Moscow all the detail heightens the sense of tension in the story.

Cummings also draws in actual modern day events in very subtle ways. There is the obvious ones like repeated references to the Cambridge 5 and the stand in for Putin but there are less obvious ones too. There is a brief mention of the FSB assassinating someone by putting Polonium-210 in their California Roll. This is a vailed reference to the assassination of Alexander Litvinenko, an FSB defector, living in London in 2006. The only reason I caught it was from reading Ben Mezrich’s Once Upon a Time in Russia. These little “blink and you’ll miss them” details make this book a joy for spy fiction buffs.

This book would appeal to lovers of Le Carre and non-fiction espionage because of its ties to Cold War history and the detail. It would also appeal individuals who like Silva’s novels, if not for the action then for the country hoping settings.