An out-of-the-corner-of-my-eye glance at a line-up of books focused quickly when one in particular – it’s cover full of two animated faces, the title writ large, a particularly urgent newspaper headline – caught my attention. I thought it was a picture book, and then I read the subtitle. And the summary. And it is decidedly not a picture book (but perhaps a graphic novel or, if not that, a heavily illustrated work of non-fiction). Intrigued, having already spent long minutes with that cover, one thing led to two books on the same topic, released over consecutive months. The two approaches provoke curiosity — what and how do the illustrations add to the tale? are there discrepancies? — and while the books are not yet in the library’s catalog, when they’re available I’ll be taking another look. 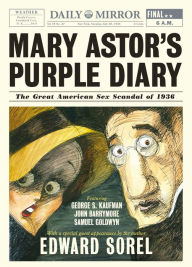 “In 1965, a young, up-and-coming illustrator by the name of Edward Sorel was living in a $97-a-month railroad flat on Manhattan’s Upper East Side. Resolved to fix up the place, Sorel began pulling up the linoleum on his kitchen floor, tearing away layer after layer until he discovered a hidden treasure: issues of the New York Daily News and Daily Mirror from 1936, each ablaze with a scandalous child custody trial taking place in Hollywood and starring the actress Mary Astor. Sorel forgot about his kitchen and lost himself in the story that had pushed Hitler and Franco off the front pages.

At the time of the trial, Mary Astor was still only a supporting player in movies, but enough of a star to make headlines when it came out that George S. Kaufman, then the most successful playwright on Broadway and a married man to boot, had been her lover. The scandal revolved around Mary’s diary, which her ex-husband, Dr. Franklyn Thorpe, had found when they were still together. Its incriminating contents had forced Mary to give up custody of their daughter in order to obtain a divorce. By 1936 she had decided to challenge the arrangement, even though Thorpe planned to use the diary to prove she was an unfit mother. Mary, he claimed, had not only kept a tally of all her extramarital affairs but graded them―and he’d already alerted the press. Enraptured by this sensational case and the actress at the heart of it, Sorel began a life-long obsession that now reaches its apex.

Featuring over sixty original illustrations, Mary Astor’s Purple Diary narrates and illustrates the travails of the Oscar-winning actress alongside Sorel’s own personal story of discovering an unlikely muse. Throughout, we get his wry take on all the juicy details of this particular slice of Hollywood Babylon, including Mary’s life as a child star―her career in silent films began at age fourteen―presided over by her tyrannical father, Otto, who “managed” her full-time and treated his daughter like an ATM machine. Sorel also animates her teenage love affair with probably the biggest star of the silent era, the much older John Barrymore, who seduced her on the set of a movie and convinced her parents to allow her to be alone with him for private “acting lessons.”

Sorel imbues Mary Astor’s life with the kind of wit and eye for character that his art is famous for, but here he also emerges as a writer, creating a compassionate character study of Astor, a woman who ultimately achieved a life of independence after spending so much of it bullied by others.

Featuring ribald and rapturous art throughout, Mary Astor’s Purple Diary is a passion project that becomes the masterpiece of one of America’s greatest illustrators.” 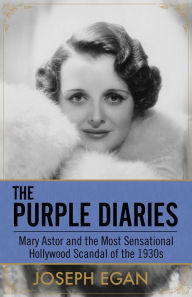 The Purple Diaries: Mary Astor and the Most Sensational Hollywood Scandal of the 1930s – Joseph Egan // RELEASE: November 2016

“1936 was on its way to being a great year for the movie industry. Theatre attendance was up; the financial setbacks experienced during the early years of The Great Depression had subsided. Americans everywhere were sitting in the dark watching the stars, and few stars shined as brightly as one of America’s most enduring screen favorites, Mary Astor.

But Astor’s story wasn’t a happy one. She was born poor, and at the first sign that she could earn money, her parents grabbed the reins and the checks. Widowed at twenty-four, Mary Astor looked for any port in a storm, and found one in Dr. Franklyn Thorpe—or so she thought.

The marriage was rocky from the start, destined for divorce from the moment the two stepped off the altar. Both were unfaithful, but the relationship did not dissolve before Mary Astor gave birth to little Marylyn Thorpe.

What followed was a custody battle that pushed The Spanish Civil War and Hitler’s 1936 Olympics right off of the front pages all over America. Although Astor and Thorpe were both ruthless in their fight to gain custody of their daughter, Thorpe held a trump card: the two diaries Mary Astor had kept for years. In these diaries, Astor detailed her own affairs as well as the myriad dalliances of some of Hollywood’s biggest names. The studio heads, longtime controllers of public perception, were desperate to keep the juiciest details from leaking.

With the complete support of the Astor family and unlimited access to the Mary Astor estate, Joseph Egan has painted a portrait of a great film actress in her most challenging role; an unwilling but determined mother battling for her daughter regardless of the harm that her affairs and her most intimate secrets would do to her career, the careers of her friends, or even Hollywood. The Purple Diaries is a look at Hollywood’s Golden Age as it has never been seen before, as Egan spins a wildly absorbing yarn about a scandal that threatened to tarnish forever the dream factory known as Hollywood.”