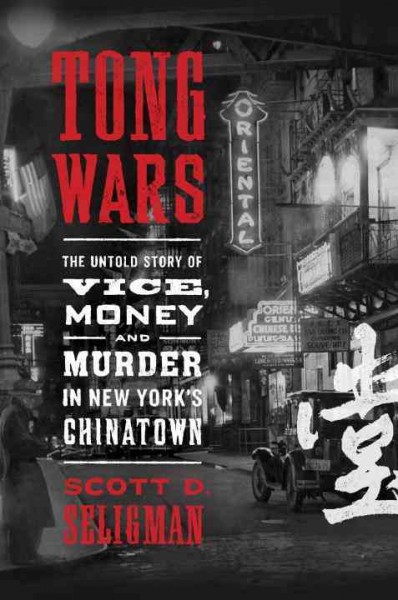 I picked up this book largely because it was, as the subtitle suggests, something I had never heard of before. Seligman’s Tong Wars is a story of Chinese American organized crime in New York City from its birth in the later half of the 19th century into the 1920s.

In 1882 the United States passed the Chinese Exclusion Act which prohibited Chinese immigration to the the US until 1943. Before this Chinese had immigrated to the west coast to do a lot of heavy manual labor of Anglo-American westward expansion. They were in some cases the majority of the laborers on the Trans-Continental Railroad. Because of their race and the fact that they competed with other labor groups, they were discriminated against and persecuted and eventually bared from further immigration. The combination of exclusion and persecution caused large numbers of Chinese to migrate to the major cities of the east coast, including New York. Once in New York they set up in the area of the city that eventually became identified with Chinatown. They opened laundries, groceries, gambling houses and worked as laborers. Along with this commerce came organized crime. This crime was centered around Tongs

Tongs were fraternal organizations set up to support Chinese immigrating to the city. They had a long history on the west coast and moved east with the immigrants. Initially they provided assistance in finding housing, setting up businesses and helping Chinese deal with the rampant racism they encountered. Over time though, they evolved into criminal organizations. Primarily they focused on collecting protection money from gambling parlors, laundries and opium dins. They also smuggled in more Chinese in violation of the Exclusion Act. They their own gambling parlors and opium dins. Different Tongs gradually came into conflict with each other and wars broke out that became increasingly more violent.

Seligman does an excellent job of describing the world of the Chinese immigrant. This is an area of history that many people don’t know a lot about and he does a good job of laying it all out. Crowded tenements and limited sources of entertainment and ever present discrimination and corruption. When you see it all the actual out break of the wars between the Tongs make sense. The growing population of Chinatown made the completion for illegal financial resources critical, bringing all the Tongs into conflict with each other. He also shows the role that an extremely corrupt police force had in the development and growth of the Tongs. The Tongs could not have run their protection rackets without reliable police support. The Tongs were even able to effectively exploit reform movements. One Tong might pose as a concerned citizen organization wanting to clean up vice to a reform organization and then sick that organization on another Tong they were in competition with.

This book is a rare look inside the world of Chinese American crime, immigrant life and the life of lower class New York in the 19th and 20th centuries in general. It is simultaneously rigorously research and readable by a general audience. Any one with a passing interest in early American history would enjoy this book.