For this Saint Patrick’s Day we thought we’d offer up some histories of Ireland that show Ireland’s interacation with the outside world throughout history. Also these titles might be a little less well known. Enjoy! 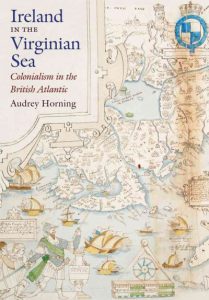 Ireland in the Virginian sea : colonialism in the British Atlantic by Audrey Horning.

In the late sixteenth century, the English started expanding westward, establishing control over parts of neighboring Ireland as well as exploring and later colonizing distant North America. Audrey Horning deftly examines the relationship between British colonization efforts in both locales, depicting their close interconnection as fields for colonial experimentation. Focusing on the Ulster Plantation in the north of Ireland and the Jamestown settlement in the Chesapeake, she challenges the notion that Ireland merely served as a testing ground for British expansion into North America. Horning instead analyzes the people, financial networks, and information that circulated through and connected English plantations on either side of the Atlantic. 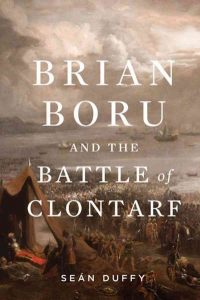 Brian Boru and the Battle of Clontarf by Seán Duffy.

Brian Boru is the most famous Irish person before the modern era, whose death at the Battle of Clontarf in 1014 is one of the few events in the whole of Ireland’s medieval history to retain a place in the popular imagination. Once, we were told that Brian, the great Christian king, gave his life in a battle on Good Friday against pagan Viking enemies whose defeat banished them from Ireland forever. More recent interpretations of the Battle of Clontarf have played down the role of the Vikings and portrayed it as merely the final act in a rebellion against Brian, the king of Munster, by his enemies in Leinster and Dublin. 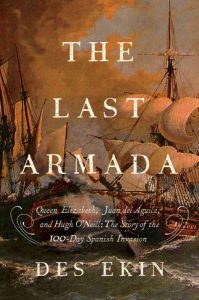 Ireland: Christmas Eve, 1601. As thunder crashes and lightning rakes the sky, three very different commanders line up for a battle that will decide the fate of a nation. General Juan del Águila has been sprung from a prison cell to command the last great Spanish armada. His mission: to seize a bridgehead in Queen Elizabeth’s England and hold it. Facing him is Charles Blount, a brilliant English strategist whose career is also under a cloud. His affair with a married woman edged him into a treasonous conspiracy—and brought him to within a hair’s breadth of the gallows. Meanwhile, Irish insurgent Hugh O’Neill knows that this is his final chance to drive the English out of Ireland. For each man, this is the last throw of the dice. Tomorrow they will be either heroes or failures. These colorful commanders come alive in this true story of courage and endurance, of bitterness and betrayal, and of drama and intrigue at the highest levels in the courts of England and Spain.

Bitter freedom : Ireland in a revolutionary world by Maurice Walsh. 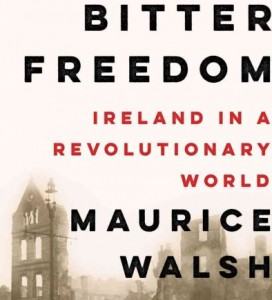 The Irish Revolution – the war between the British authorities and the newly-formed IRA – was the first successful revolt anywhere against the British Empire. This is a vividly-written, compelling narrative placing events in Ireland in the wider context of a world in turmoil after the ending of a global war: one that saw the collapse of empires and the rise of fascist Italy and communist Russia. Walsh shows how developments in Europe and America had a profound effect on Ireland, influencing the attitudes and expectations of combatants and civilians. Walsh also brings to life what Irish people who were not fully involved in the fighting were doing – the plays they went to, the exciting films they watched in the new cinemas, the books they read and the work they did. The freedom from Britain that most of them wanted was, when it came, a bitter disappointment to a generation aware of the promise of modernity.