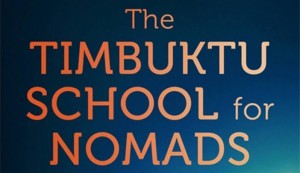 Feeling a need to read about a place warmer than here? I give you the Sahara. The world’s largest hot desert with an average high temperature of 104 degrees and rain fall that is virtually non-existent in some places. So what is Nicholas Jubber doing in the Sahara? Learning stuff from nomads. Specifically the Tuareg nomads in and around the city of Timbuktu in Mali. What he learned is the story of The Timbuktu School for Nomads.

One of the major themes of the book is the rather schizophrenic relationship society has with nomads. On the one hand they are seen as a relic of a bygone age. On the other they have been seen as an ideal of simple/noble living. That complex relationship plays out at the local level with the interplay between urban dwellers and nomads. Timbuktu depends on nomads for raw materials, like salt and hides, but also sees the nomads as a threat to civilization.

Jubber early on decided that nomads had a lot to teach and set out to learn it. And learn he does. After spending some time working in a Fez tannery, he sets off for Timbuktu, where he learns the fine art of loading, ridding and generally not being killed by camels.

One of the great things about this book is the passion that Jubber brings to it. He argues that far from being throwbacks to an earlier time nomadism is as a way of life is alive and well. He throws himself into that life, whether it’s practicing his Arabic by translating hip hop lyrics for his friends, or simply practicing his camel calling. That passion spills over onto the reader, who feels his sense of achievement when he finally solos on his camel.

This a great read for anyone who loves armchair travel.