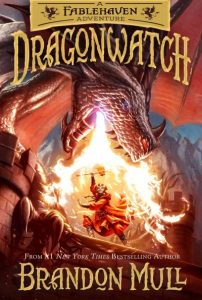 Adventure fantasies are sort of my jam. Several years ago I noticed the Fablehaven series flying off the library shelves and into the hands of middle graders, so I had to check it out. I. Loved. It. So, of course I am excited to see Brandon Mull return to this amazing series!

To set the scene: Life at Fablehaven has become routine, though never boring, for Kendra and Seth Sorenson, who remain at the preserve to help their grandparents (all four of them now) in their roles as caretakers. For many magical creatures — and the humans who love/fear them — life has gotten better since the collapse of the demon realm of Zzyzx and its rebirth as the new Fairy Kingdom. But for the dragons, who helped win the war and perhaps expected a better, freer life for their troubles, life has not improved at all. And they’re getting restless.

When the defenses of Wyrmroost go on the fritz, Kendra and Seth are called in to try on the role of co-caretakers. Because of their special abilities, the siblings together have the power of a dragon tamer when in physical contact with one another. When they arrive, they find that the dragon king Celebrant (whom Fablehaven fans will remember) is leading the dragons in a subversive campaign that’s about to become a full-on uprising unless they can find a way to balance his power.

My only fear in starting this book was that the series would rely too much on its predecessor and not provide enough raw meat for us to chew on. That’s not the case, however, as Mull has thrown in enough new meat for readers and dragons alike. Mull’s story will captivate young readers, have them racing toward the end, and then dump them off the edge of a cliff in true, epic-series starting fashion.

A word of caution, though: new readers will likely adore this tale, but may get confused if they haven’t read the Fablehaven series, as previous events are discussed quite often and play a real role in defining each character returning for Dragonwatch. If you haven’t read Fablehaven, I’d probably do that first…or use the time waiting for the next installment to catch up on past events.