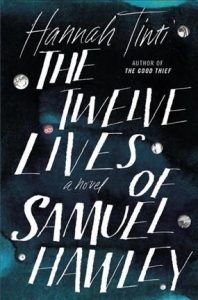 The Twelve Lives of Samuel Hawley by Hannah Tinti (a local author; she also wrote The Good Thief)

“Samuel Hawley isn’t like the other fathers in Olympus, Massachusetts. A loner who spent years living on the run, he raised his beloved daughter, Loo, on the road, moving from motel to motel, always watching his back. Now that Loo’s a teenager, Hawley wants only to give her a normal life. In his late wife’s hometown, he finds work as a fisherman, while Loo struggles to fit in at the local high school.

Growing more and more curious about the mother she never knew, Loo begins to investigate. Soon, everywhere she turns, she encounters the mysteries of her parents’ lives before she was born. This hidden past is made all the more real by the twelve scars her father carries on his body. Each scar is from a bullet Hawley took over the course of his criminal career. Each is a memory: of another place on the map, another thrilling close call, another moment of love lost and found. As Loo uncovers a history that’s darker than she could have known, the demons of her father’s past spill over into the present—and together both Hawley and Loo must face a reckoning yet to come.”

Fran: A motherless young girl raised by an unconventional father traveling back and forth in time across America. They finally return home to a fictional NorthShore town (locals would recognize it as Gloucester).  The twelve lives refer to the near-death experiences of Loo’s dad, and how Loo must come to terms with her family’s past and present. 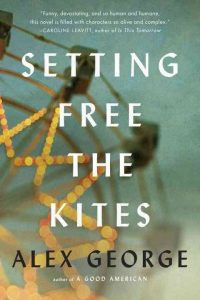 “For Robert Carter, life in his coastal Maine hometown is comfortably predictable. But in 1976, on his first day of eighth grade, he meets Nathan Tilly, who changes everything. Nathan is confident, fearless, impetuous—and fascinated by kites and flying. Robert and Nathan’s budding friendship is forged in the crucible of two family tragedies, and as the boys struggle to come to terms with loss, they take summer jobs at the local rundown amusement park. It’s there that Nathan’s boundless capacity for optimism threatens to overwhelm them both, and where they learn some harsh truths about family, desire, and revenge.”

Fran: A coming of age story of the friendship between two boys. Though so different, their lives intertwine through shared experiences of love, loss and teenage angst. Another novel set in New England. 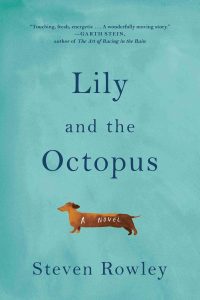 Lily & the Octopus by Steven Rowley

“Teddy is unhappily single in L.A. In between sessions with his therapist and dates with men he meets online, Teddy has debates with his dachshund, Lily, who occupies his heart. Unfortunately, he is also able to communicate with the “octupus” attached to Lily’s head, which is soon revealed to be a metaphor for Lily’s lethal cranial tumor. As Lily’s condition worsens, Teddy faces off with the “octopus”, engaging it in a battle of wills that takes on epic proportions. An exceedingly authentic, keenly insightful, funny and ardent tribute to the purity of love between a pet and its human.”

Fran: A must read for dog lovers! Lily is a dachshund and the story revolves around the joy that Lily brings to her owner, and his coming to terms with Lily’s illness. Have tissues ready.