Jane is a household name in the literary world, owing in no small part to Eyre and Austen. Indulge your love for both ladies with these forthcoming titles. 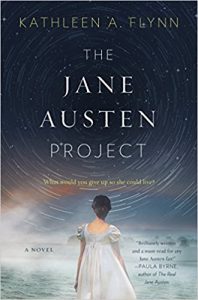 The Jane Austen Project by Kathleen Flynn (Available in July)

“Perfect for fans of Jane Austen, this engrossing debut novel offers an unusual twist on the legacy of one of the world’s most celebrated and beloved authors: two researchers from the future are sent back in time to meet Jane and recover a suspected unpublished novel.

London, 1815: Two travelers—Rachel Katzman and Liam Finucane—arrive in a field in rural England, disheveled and weighed down with hidden money. Turned away at a nearby inn, they are forced to travel by coach all night to London. They are not what they seem, but rather colleagues who have come back in time from a technologically advanced future, posing as wealthy West Indies planters—a doctor and his spinster sister. While Rachel and Liam aren’t the first team from the future to “go back,” their mission is by far the most audacious: meet, befriend, and steal from Jane Austen herself.

Carefully selected and rigorously trained by The Royal Institute for Special Topics in Physics, disaster-relief doctor Rachel and actor-turned-scholar Liam have little in common besides the extraordinary circumstances they find themselves in. Circumstances that call for Rachel to stifle her independent nature and let Liam take the lead as they infiltrate Austen’s circle via her favorite brother, Henry.

But diagnosing Jane’s fatal illness and obtaining an unpublished novel hinted at in her letters pose enough of a challenge without the continuous convolutions of living a lie. While her friendship with Jane deepens and her relationship with Liam grows complicated, Rachel fights to reconcile the woman she is with the proper lady nineteenth-century society expects her to be. As their portal to the future prepares to close, Rachel and Liam struggle with their directive to leave history intact and exactly as they found it…however heartbreaking that may prove.” [Read an Excerpt] 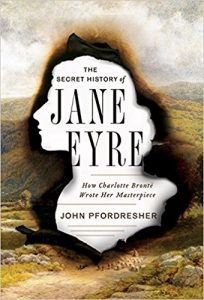 The Secret History of Jane Eyre: How Charlotte Brontë Wrote Her Masterpiece by John Pfordresher (Available in June)

“Why did Charlotte Brontë go to such great lengths on the publication of her acclaimed, best-selling novel, Jane Eyre, to conceal its authorship from her family, close friends, and the press? In The Secret History of Jane Eyre, John Pfordresher tells the enthralling story of Brontë’s compulsion to write her masterpiece and why she then turned around and vehemently disavowed it.

Few people know how quickly Brontë composed Jane Eyre. Nor do many know that she wrote it during a devastating and anxious period in her life. Thwarted in her passionate, secret, and forbidden love for a married man, she found herself living in a home suddenly imperiled by the fact that her father, a minister, the sole support of the family, was on the brink of blindness. After his hasty operation, as she nursed him in an isolated apartment kept dark to help him heal his eyes, Brontë began writing Jane Eyre, an invigorating romance that, despite her own fears and sorrows, gives voice to a powerfully rebellious and ultimately optimistic woman’s spirit.

The Secret History of Jane Eyre expands our understanding of both Jane Eyre and the inner life of its notoriously private author. Pfordresher connects the people Brontë knew and the events she lived to the characters and story in the novel, and he explores how her fecund imagination used her inner life to shape one of the world’s most popular novels.

By aligning his insights into Brontë’s life with the timeless characters, harrowing plot, and forbidden romance of Jane Eyre, Pfordresher reveals the remarkable parallels between one of literature’s most beloved heroines and her passionate creator, and arrives at a new understanding of Brontë’s brilliant, immersive genius.”