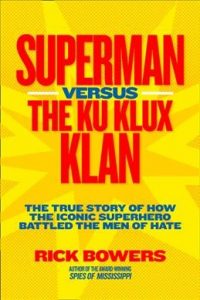 In 1946 something amazing happened in the world of comics and pop-culture. The Golden Age of Comics was coming to a close. In less than a decade Fredric Wetham’s Seduction of the Innocent would demonize the industry. Comic books would be smeared as leading to delinquency and fascism. Wertham must have been unaware of the Superman radio show halting the 1940’s Ku Klux Klan revival. Rick Bowers documents this unusual moment in which popular-culture was used to combat hate.

The Superman radio show was in need of post-war antagonists. In the spring of 1946 they ran a serial battling bigotry in “The Hate Monger’s Organization”, followed up by “The Clan of the Fiery Cross” a month later. Stetson Kennedy, an investigative reporter and civil rights activist had leaked rituals and other Klan secrets to the radio show. This sensitive information was incorporated into a sixteen part serial in which Superman battled the Clan of the Fiery Cross. Exposed and embarrassed the Klan revival ground to a halt.

For those interested in listening to “The Hate Monger’s Organization” or “The Clan of the Fiery Cross”, audio clips can be found in The Internet Archive.

Superman Versus the Ku Klux Klan is available at the Peabody Institute of Danvers or through interlibrary loan. Danvers residents and patrons using our public computers or Wi-Fi have access to an e-book version through OverDrive.