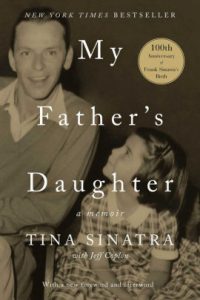 Released in 2015, the 100th Anniversary of the birth of Frank Sinatra, this sensitively written yet honest and raw portrayal of the life of the great entertainer is a real page turner for Sinatra fans. Tina Sinatra (Frank’s youngest daughter) brings the reader back in time to her father’s past as he attempted to gain recognition as a singer and performer. She discusses his private life with great candor. She speaks of his wives, lovers, friendships, family life, and his mental health struggles. Tina relates how he was absent much of the time, yet did love his children very much and would try to be there for birthdays and other family celebrations. His life and career most certainly had many ups and downs. This memoir provides the reader with insight into Frank Sinatra, the complex and talented man behind the music. I highly recommend this book.

My Father’s Daughter is available in NOBLE.