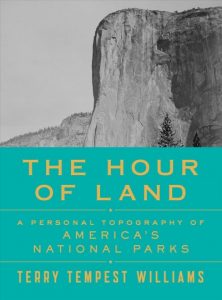 “For years, America’s national parks have provided public breathing spaces in a world in which such spaces are steadily disappearing, which is why close to 300 million people visit the parks each year. Now, to honor the centennial of the National Park Service, Terry Tempest Williams, the author of the beloved memoir When Women Were Birds, returns with The Hour of Land, a literary celebration of our national parks, what they mean to us, and what we mean to them. Through twelve carefully chosen parks, from Yellowstone in Wyoming to Acadia in Maine to Big Bend in Texas, Tempest Williams creates a series of lyrical portraits that illuminate the unique grandeur of each place while delving into what it means to shape a landscape with its own evolutionary history into something of our own making. Part memoir, part natural history, and part social critique, The Hour of Land is a meditation and manifesto on why wild lands matter to the soul of America. Our national parks stand at the intersection of humanity and wildness, and there’s no one better than Tempest Williams to guide us there.”

It was the memoir mentioned in the summary above – When Women Were Birds – that hooked me on Williams’ writing. I wasn’t let down with this title, encountering slices of National Parks history I knew little to nothing about, along with Williams’ beautiful prose, the knack she has for plucking out of any given landscape images that stick in memory.

If you are curious about her memoir… 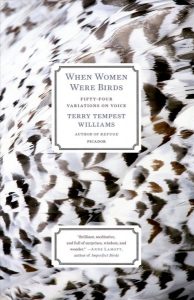 ““I am leaving you all my journals, but you must promise me you won’t look at them until after I’m gone.” This is what Terry Tempest Williams’s mother, the matriarch of a large Mormon clan in northern Utah, told her a week before she died. It was a shock to Williams to discover that her mother had kept journals. But not as much of a shock as it was to discover that the three shelves of journals were all blank. In fifty-four short chapters, Williams recounts memories of her mother, ponders her own faith, and contemplates the notion of absence and presence art and in our world. When Women Were Birds is a carefully crafted kaleidoscope that keeps turning around the question: What does it mean to have a voice?”