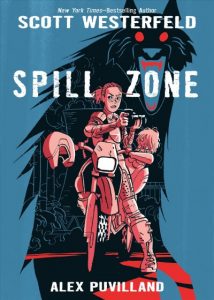 Three years ago an event destroyed the small city of Poughkeepsie, forever changing reality within its borders. Uncanny manifestations and lethal dangers now await anyone who enters the Spill Zone. The Spill claimed Addison’s parents and scarred her little sister, Lexa, who Addison provides for by photographing the Zone’s twisted attractions on illicit midnight rides. When an eccentric collector makes a million-dollar offer, Addison breaks her own hard-learned rules of survival and ventures farther than she has ever dared. Within the Spill Zone, Hell awaits–and it seems to be calling Addison’s name.

A mind-bendy, trippy exploration of an unexplainable (and unnatural?) phenomenon and its physical and emotional aftermath, Spill Zone is a truly wtf-is-going-on-here start to a fantastic series. Although it measures over 200 pages, this graphic novel feels like nothing short of a whirlwind introduction to main character Addison’s life post-Spill — sneaking into the containment zone and navigating the physical realities of the Spill to take pictures of who-knows-what and providing for her (probably traumatized) sister. I literally had to force myself to slow down and admire the gorgeous illustrations by Alex Puvilland and coloring by Hilary Sycamore because all I really wanted to do was speed-read fast enough through Westerfeld’s narrative.

And then I got to the end of the book and blinked a lot and thought, “Well, that sucks” because it just ends and I NEED MORE. Honestly, if I had known this was merely the start of a series, I would have waited to read the entire narrative arc — because right now I am itching for Westerfeld to finish this goddamn masterpiece.