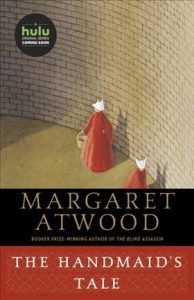 This look at the near future presents the story of Offred, a Handmaid in the Republic of Gilead, once the United States, an oppressive world where women are no longer allowed to read and are valued only as long as they are viable for reproduction.

The Handmaid’s Tale feels like a fresh take on the current political climate – helped, in part, by the recent Hulu miniseries now greenlit for a second season – but Margaret Atwood published it over 30 years ago. To both readers and author alike, the thought of a hostile government takeover by religious extremists probably seemed far-fetched… but it doesn’t really feel that way anymore when civil liberties, police brutality, and bodily autonomy still dominate the news. The nameless handmaid who narrates the novel is one of few fertile women whose sole job is to produce a child for the couple to which she’s assigned, and her story weaves days filled with, on one end, grocery shopping and daily walks and, on the other, ritualistic violence and rape.

It’s worth noting, however, that although Atwood based her society on, among other things, “17th-century American Puritan theocracy,” a lot of the plot points and inner workings derive straight from the way black women and people of color were (and unfortunately are) treated in America. As Priya Nair states in an article for Bitch, Atwood takes “the oppression of Black women and applies it indiscriminately to white women…. [but] writing a story about white supremacy with no Black characters, while using the erasure and exploitation of Black pain, is art that further silences and marginalizes Black women at its core.”

If you have even an inkling of interest, read The Handmaid’s Tale – it is hard to get through but still important to read – but don’t stop there. Maybe try some Octavia Butler and then deep do a dive into even more science fiction and fantasy novels written by women of color. Or start digesting the plethora of long-form and book-length political nonfiction on your issue of choice (which I turn to when I can’t watch one more minute of the daily news cycle). Or even just escape the real world and read and read and read. You got this.