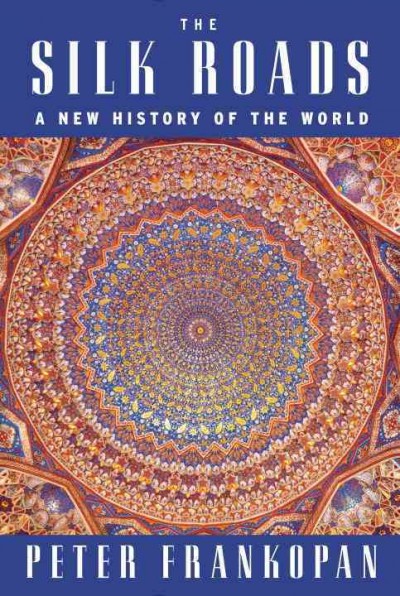 Silk Roads is the History Book Group title for January. I tend to devour books on the silk road. There’s something about towns with names like Samarkand and Merv and Bukhara that just ignites my inner adventurer. That said, this is not that book. At least not entirely. This book largely explores the roll that trade with Asia and Africa affected European commerce throughout history.

Those affects were pretty significant. Frankopan essentially argues that the demand for luxury goods from the east was the prime mover in the creation of modern Europe. The biggest example of this is the age of discovery when European powers set out ostensibly to discover a more direct source of eastern luxury goods and ended up founding colonies and exploiting local populations all over the world. There were other effects as well. At different periods demand for luxury goods from Asia depleted silver supplies in Europe causing worldwide economic declines.

What is interesting in the book as a whole though is that for large portions of it, Asia is a behind the scenes player. We see the city states of Italy grow fat off of supporting the crusades knowing that goods from Asia are one of the prime movers of those states. We see Europeans grabbing up lands all over the world on the possibility that those lands put them a little bit closer to Asia. But Asia itself is often not directly part of the story.

This is an excellent book for those interested in long distance trade and how it affects history however if you are looking for a book specifically about the Silk Road there are better options. For example Lost Enlightenment: Central Asia’s Golden Age from the Arab Conquest to Tamerlane by S. Frederick Starr or When Asia Was the World by Stewart Gordon