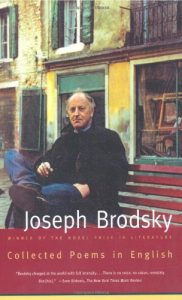 “One of the greatest and grandest advocates of the literary vocation, Joseph Brodsky truly lived his life as a poet, and for it earned eighteen months in an Arctic labor camp, expulsion from his native country, and the Nobel Prize in Literature. Such were one man’s wages. Here, collected for the first time, are all the poems he published in English, from his earliest collaborations with Derek Walcott, Richard Wilbur, Howard Moss, and Anthony Hecht to the moving farewell poems he wrote near the end of his life. With nearly two hundred poems, several of them never before published in book form, this will be the essential volume of Brodsky’s work.” 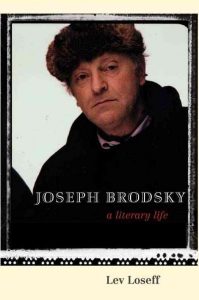 “The work of Joseph Brodsky (1940–1996), one of Russia’s great modern poets, has been the subject of much study and debate. His life, too, is the stuff of legend, from his survival of the siege of Leningrad in early childhood to his expulsion from the Soviet Union and his achievements as a Nobel Prize winner and America’s poet laureate.

In this penetrating biography, Brodsky’s life and work are illuminated by his great friend, the late poet and literary scholar Lev Loseff. Drawing on a wide range of source materials, some previously unpublished, and extensive interviews with writers and critics, Loseff carefully reconstructs Brodsky’s personal history while offering deft and sensitive commentary on the philosophical, religious, and mythological sources that influenced the poet’s work. Published to great acclaim in Russia and now available in English for the first time, this is literary biography of the first order, and sets the groundwork for any books on Brodsky that might follow.”