A few collections and an anthology I am eager to lean into (that may reappear as recommendations next year during National Poetry Month): 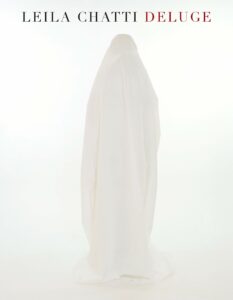 “In her early twenties, Leila Chatti started bleeding and did not stop. Physicians referred to this bleeding as flooding. In the Qur’an, as in the Bible, the Flood was sent as punishment. The idea of disease as punishment drives this collection’s themes of shame, illness, grief, and gender, transmuting religious narratives through the lens of a young Arab-American woman suffering a taboo female affliction. Deluge investigates the childhood roots of faith and desire alongside their present day enactments. Chatti’s remarkably direct voice makes use of innovative poetic form to gaze unflinchingly at what she was taught to keep hidden. This powerful piece of life-writing depicts Chatti’s journey from diagnosis to surgery and remission in meticulous chronology that binds body to spirit and advocates for the salvation of both. Chatti blends personal narrative, religious imagery, and medical terminology in a chronicle of illness, womanhood, and faith.” 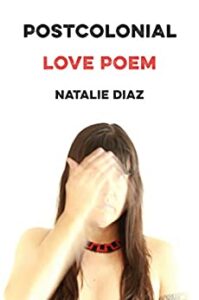 “Postcolonial Love Poem is an anthem of desire against erasure. Natalie Diaz’s brilliant second collection demands that every body carried in its pages―bodies of language, land, rivers, suffering brothers, enemies, and lovers―be touched and held as beloveds. Through these poems, the wounds inflicted by America onto an indigenous people are allowed to bloom pleasure and tenderness: “Let me call my anxiety, desire, then. / Let me call it, a garden.” In this new lyrical landscape, the bodies of indigenous, Latinx, black, and brown women are simultaneously the body politic and the body ecstatic. In claiming this autonomy of desire, language is pushed to its dark edges, the astonishing dunefields and forests where pleasure and love are both grief and joy, violence and sensuality.

Diaz defies the conditions from which she writes, a nation whose creation predicated the diminishment and ultimate erasure of bodies like hers and the people she loves: “I am doing my best to not become a museum / of myself. I am doing my best to breathe in and out. // I am begging: Let me be lonely but not invisible.” Postcolonial Love Poem unravels notions of American goodness and creates something more powerful than hope―in it, a future is built, future being a matrix of the choices we make now, and in these poems, Diaz chooses love.” 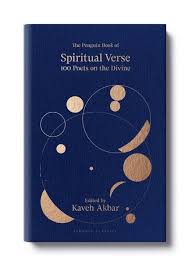 The Penguin Book of Spiritual Verse – edited by Kaveh Akbar

“Poets have always looked to the skies for inspiration, and have written as a way of getting closer to the power and beauty they sense in nature, in each other and in the cosmos. This anthology serves as a truly holistic and global survey to a lyric conversation about the divine that has been going on for millenia.

Beginning with the earliest attributable author in all of human literature, the twenty-third century BC Sumerian High Priestess Enheduanna, and taking in a constellation of voices – from King David, to Lao Tzu, to the fourteenth century Ethiopian national religious epic, the Kebra Nagast – this anthology presents a number of canonical voices like Blake, Rumi, Dickinson and Tagore, alongside lesser-anthologized diverse voices that showcase the breathtaking multiplicity of ways in which humanity has responded to the Divine across the centuries.

These poets’ voices commune across the centuries, offering readers a chance to experience for themselves the vast and powerful interconnectedness of these incantations orbiting the most elemental of all subjects – our spirit.”