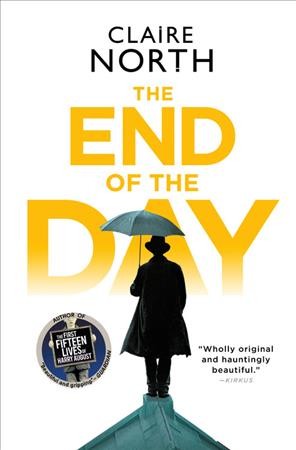 So one Saturday I was emptying the book drop and Claire North’s The End of the Day was on the top of the pile of books. I looked at the dust jacket and thought it sounded intriguing. There was work to be done though so I checked it in and put it on the shelving cart. A couple weeks ago I was walking through the New Books Room looking for a miss-shelved book when I saw it again. At this point I decided it was some kind of sign so I grabbed it and took it home.

Charlie, the main character, has a new job. He’s the Harbinger of Death. He checks the calendar on his phone and it tells him who he has to see and when. He might have to bring a bottle of whisky to the last know speaker of a native language or bring a first edition picture book to a dying child in a hospital. He never knows from one day to the next where he’s going or what his going means. Because he’s the Harbinger of Death you don’t know if he’s there as a courtesy to let you know the end is neigh or a warning to change your ways in the hope Death will pass you by.

Then there’s Death and all of his friends. He or She or it (depends on who you expect to see) is a Four Horsemen of the Apocalypse Death. He believes in giving credit where credit is due thus the need for a Harbinger of Death. There are also Harbingers of Pestilence, War, and Famine who go out and do the work for their respective horsemen.

The book is almost a character study. We follow Charlie as he encounters all of these people and situations. The stories that surround his work are alternately sweet, sad, touching and even horrifying.  There is also his struggle to have a normal social life. How do you have a relationship when you never know when you’ll be home? Also as he travels he indulges his hobbies of collecting music and obscure soccer team shirts. There is not much of a plot but that doesn’t really bother me since I don’t read for plot so much a place and character. There are loads of that.