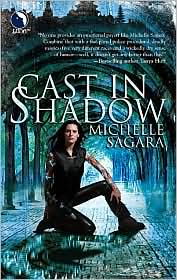 Seven years ago Kaylin fled the crime-riddled streets of Nightshade, knowing that something was after her. Children were being murdered — and all had the same odd markings that mysteriously appeared on her own skin . . .

Since then, she’s learned to read, she’s learned to fight and she’s become one of the vaunted Hawks who patrol and police the City of Elantra. Alongside the winged Aerians and immortal Barrani, she’s made a place for herself, far from the mean streets of her birth.

But children are once again dying, and a dark and familiar pattern is emerging, Kaylin is ordered back into Nightshade with a partner she knows she can’t trust, a Dragon lord for a companion and a device to contain her powers — powers that no other human has.

You know what I liked best about this book? It surprised me. I wasn’t expecting the strong high fantasy – with urban fantasy currents – that Cast in Shadow delivered.

For one, Kaylin’s character got to me. I think she got to me because of her past; she’s running from the hunger, fear, uncertainty and pain of her childhood. And she thinks she’s escaped, that she’s made something of herself; it strikes her like a slap when she’s forced to head back to her old home in the Nightshade fief, confronting terrifying memories and very real spectres head-on. Sympathy? I felt plenty of it. That kind of strong, haunted heroine is a trademark of urban fantasy, as is the grit of the fief setting, but…

Cast in Shadow is definitely high fantasy. Elantra is not a world we can completely recognize; the cultures are too varied and run to ancient dragon lords, Barrani courts, and Hawks who patrol the city, winging across the sky night and day. And then there’s the magic, which flares both dark and bright, permeating the action and fueling the conflict. I was quite pleased with Sagara’s worldbuilding and immediately wanted to know more.

And, okay, there was one more thing that riveted my attention: Nightshade, an outcaste Barrani lord. He’s…something. And it’s all shivery good.