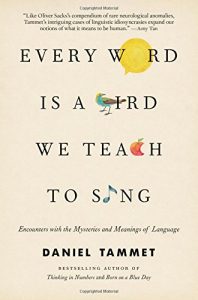 “Is vocabulary destiny? Why do clocks “talk” to the Nahua people of Mexico? Will A.I. researchers ever produce true human-machine dialogue? In this mesmerizing collection of essays, Daniel Tammet answers these and many other questions about the intricacy and profound power of language.

In Every Word Is a Bird We Teach to Sing, Tammet goes back in time to London to explore the numeric language of his autistic childhood; in Iceland, he learns why the name Blær became a court case; in Canada, he meets one of the world’s most accomplished lip readers. He chats with chatbots; contrives an “e”-less essay on lipograms; studies the grammar of the telephone; contemplates the significance of disappearing dialects; and corresponds with native Esperanto speakers – in their mother tongue.

A joyous romp through the world of words, letters, stories, and meanings, Every Word Is a Bird We Teach to Sing explores the way communication shapes reality. From the art of translation to the lyricism of sign language, these essays display the stunning range of Tammet’s literary and polyglot talents.”

I picked up Every Word Is a Bird We Teach to Sing, turned to the first page, and knew I would not be putting it back down. Tammet’s voice is lyrical and affecting; it drew me in from the first, kept me there with him on a journey through several countries and their thriving and reviving languages. If you’re in the mood for a book that will make you look at familiar words in a different, brighter light, search no more. This is it.

The world was made up of words. But I thought and felt and sometimes dreamed in a private language of numbers.

In my mind each number had a shape—complete with color and texture and occasionally motion (a neurological phenomenon that scientists called synesthesia)—and each shape a meaning. The meaning could be pictographic: eighty-nine, for instance, was dark blue, the color of a sky threatening storm; a beaded texture; and a fluttering, whirling, downward motion I understood as “snow” or, more broadly, “winter.”