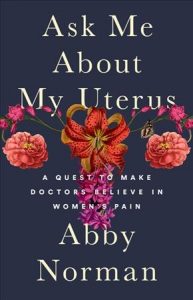 Summary: In the fall of 2010, Abby Norman was repeatedly hospitalized in excruciating pain, but doctors insisted it was a urinary tract infection and sent her home with antibiotics. Norman ultimately dropped out of college and embarked on what would become a years-long journey to discover what was wrong with her, and it wasn’t until she took matters into her own hands that she found an accurate diagnosis of endometriosis. Putting her own trials into a broader historical, sociocultural, and political context, Norman shows that women’s bodies have long been the battleground of a never-ending war for power, control, medical knowledge, and truth. It’s time to refute the belief that being a woman is a preexisting condition.

Abby Norman’s Ask Me About My Uterus: A Quest to Make Doctors Believe in Women’s Pain is, in part, a look back at the years she was in excruciating, chronic pelvic pain – and the many years that followed before she obtained an endometriosis diagnosis. Although expanding outward from her first sign of ill-heath, Norman also spends a good chunk of the book looking backward at her turbulent and neglectful childhood, which only serves to make her ultimate (and permanent) leave of absence from Sarah Lawrence College that much more heartbreaking. She might sound too matter-of-fact for some readers, but I enjoyed her candor. This is what I went through, she muses. This is how I’m strong. This is why I matter. Norman is a terrific writer, though, and even if her recollections come off as laissez-faire, they only serve to highlight the ways in which women and children are vulnerable, how often they and their experiences are overlooked.

The book is also an attempt to quantify the centuries women and their pain have been ignored and under-diagnosed by the medical community. It’s not an easy read, but why would it be? The term hysteric dates back to the mid 17th century (400 years!!!) and literally means “suffering in the womb”. Greeks believed that hysteria was peculiar to women and caused by disturbances in the uterus, and this belief has only doubled down in the intervening years. (Have you ever heard of Freud??) Endometriosis.org states that 10% of individuals suffer from endometriosis, and that sometimes a diagnosis can happen after twelve years of symptoms (12!!).* I took long sighs while reading, my heart sinking at some of Norman’s experiences, my pelvis wincing in camaraderie.

Ask Me About My Uterus is more than just a memoir. It’s a rallying cry to believe women when they say they are in pain. A demand to receive better medical care – more empathetic, more prompt – that doesn’t force the patient to do their own research. A request to listen. Everyone should read it.

Note: Goodreads has a great list of books which detail sexism in science (of which Ask Me About My Uterus is just one of many), and for those looking for more endo memoirs, there’s Giving Up the Ghost by Hilary Mantel and Love, Loss, and What We Ate by Padma Lakshmi.

* Did you know that those who menstruate can potentially do so for forty years (or more). Or that that’s about 400-500 week-long cycles in pain and bleeding? Which can amount to almost ten years of pain?? Because I didn’t.