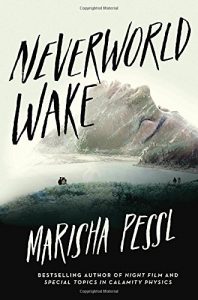 Neverworld Wake – Marisha Pessl
“Once upon a time, back at Darrow-Harker School, Beatrice Hartley and her five best friends were the cool kids, the beautiful ones. Then the shocking death of Jim–their creative genius and Beatrice’s boyfriend–changed everything.

One year after graduation, Beatrice is returning to Wincroft–the seaside estate where they spent so many nights sharing secrets, crushes, plans to change the world–hoping she’ll get to the bottom of the dark questions gnawing at her about Jim’s death.

But as the night plays out in a haze of stilted jokes and unfathomable silence, Beatrice senses she’s never going to know what really happened.

Then a mysterious man knocks on the door. Blithely, he announces the impossible: time for them has become stuck, snagged on a splinter that can only be removed if the former friends make the harshest of decisions.

Now Beatrice has one last shot at answers . . . and at life.

And so begins the Neverworld Wake.” 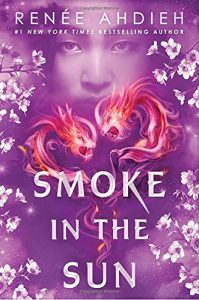 Smoke in the Sun – Renee Ahdieh
“After Okami is captured in the Jukai forest, Mariko has no choice–to rescue him, she must return to Inako and face the dangers that have been waiting for her in the Heian Castle. She tricks her brother, Kenshin, and betrothed, Raiden, into thinking she was being held by the Black Clan against her will, playing the part of the dutiful bride-to-be to infiltrate the emperor’s ranks and uncover the truth behind the betrayal that almost left her dead.

With the wedding plans already underway, Mariko pretends to be consumed with her upcoming nuptials, all the while using her royal standing to peel back the layers of lies and deception surrounding the imperial court. But each secret she unfurls gives way to the next, ensnaring Mariko and Okami in a political scheme that threatens their honor, their love and the very safety of the empire.” 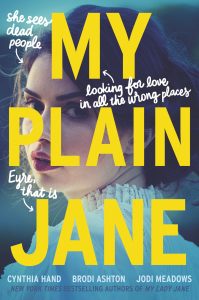 My Plain Jane – Cynthia Hand, Brodi Ashton, Jodi Meadows
“You may think you know the story. Penniless orphan Jane Eyre begins a new life as a governess at Thornfield Hall, where she meets one dark, brooding Mr. Rochester—and, Reader, she marries him. Or does she?

Prepare for an adventure of Gothic proportions, in which all is not as it seems, a certain gentleman is hiding more than skeletons in his closets, and one orphan Jane Eyre, aspiring author Charlotte Bronte, and supernatural investigator Alexander Blackwood are about to be drawn together on the most epic ghost hunt this side of Wuthering Heights.” 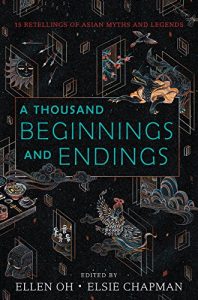 “Fifteen bestselling and acclaimed authors reimagine the folklore and mythology of East and South Asia in short stories that are by turns enchanting, heartbreaking, romantic, and passionate.

A mountain loses her heart. Two sisters transform into birds to escape captivity. A young man learns the true meaning of sacrifice. A young woman takes up her mother’s mantle and leads the dead to their final resting place.

From fantasy to science fiction to contemporary, from romance to tales of revenge, these stories will beguile readers from start to finish. For fans of Neil Gaiman’s Unnatural Creatures and Ameriie’s New York Times–bestselling Because You Love to Hate Me.”

The Opposite of Here – Tara Altebrando 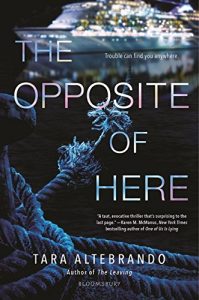 “Natalie’s parents are taking her and her three best friends on a cruise for her seventeenth birthday. A sail-a-bration, they call it. But it’s only been a few short months since Natalie’s boyfriend died in a tragic accident, and she wants to be anywhere but here.

Then she meets a guy on the first night and sparks fly. After a moonlit conversation on a secluded deck of the ship, Natalie pops down to her cabin to get her swimsuit so they can go for a dip. But when she returns, he’s gone. Something he said makes her think he might have . . . jumped? No, he couldn’t have.

But why do her friends think she’s crazy for wanting to make sure he’s okay? Also, why do they seem to be hiding something from her? And how can she find him when she doesn’t even know his name? Most importantly, why is the captain on the intercom announcing the urgent need for a headcount?

With her signature thrilling storytelling, the author of The Leaving and The Possible explores our vulnerability to the power of suggestion-and the lies we tell others and ourselves-in a twisting, Hitchcock-inspired mystery with high stakes and dark secrets.”