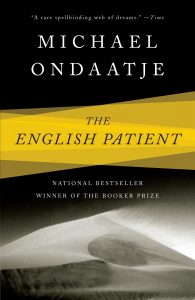 I have a vague recollection of watching the Academy Award-winning film adaptation of this novel, possibly on television, and possibly not all the way through, start to finish, but certainly a long time ago. Likely it was for the best that I did not seek out the novel at that time; I wouldn’t have appreciated its construction, or Ondaatje’s rich imagery, or the history scattered in tidbits across the plot, mirroring Almasy’s heavily annotated and generally jotted-in copy of Herodotus’ The Histories. No, I came into its company at exactly the right time, and interestingly enough at a time that finds the novel on the receiving end of renewed exposure via the Golden Man Booker Prize.

In his New Yorker article, Louis Menand wrote of Ondaatje’s characters: “[They] are ciphers. We have no affective connection with them.” But the fact of the matter is that I did not take up The English Patient for character or for plot, but for language. I wanted to be caught up in its shifting moods and in the eddies of its nonlinear narrative. I wanted to take it apart—line by line and scene by scene—to have a long look at its framework. (I was only slightly jealous of Ondaatje’s research forays in the Royal Geographic Society. I badly wanted Almasy’s bursting copy of The Histories to be a real thing so I could hold it in my hands.) Reading the novel is a nudge in the direction of exploration: of unknown-to-me history, of places I’ve never been, settings I’ve never seen. And that is why I am recommending the novel.

As I was so fascinated by the choices made style-wise, I went looking for background information on Ondaatje, on how he crafts his fiction, and lucked into a couple of things, including the brief video below, which offers a glimpse into the four notebooks Ondaatje filled with the first draft. (How he made heads or tails of his own handwriting is perhaps worthy of a video of its own.)

About The English Patient:

“The nurse Hana, exhausted by death, obsessively tends to her last surviving patient. Caravaggio, the thief, tries to reimagine who he is, now that his hands are hopelessly maimed. The Indian sapper Kip searches for hidden bombs in a landscape where nothing is safe but himself. And at the center of his labyrinth lies the English patient, nameless and hideously burned, a man who is both a riddle and a provocation to his companions—and whose memories of suffering, rescue, and betrayal illuminate this book like flashes of heat lightning.”

Have you read The English Patient? Here are a few other suggestions based solely on things made mention of in the book.

The Key to Rebecca – Ken Follett
“A brilliant and ruthless Nazi master agent is on the loose in Cairo. His mission is to send Rommel’s advancing army the secrets that will unlock the city’s doors. In all of Cairo, only two people can stop him. One is a down-on-his-luck English officer no one will listen to. The other is a vulnerable young Jewish girl.”

The Histories – Herodotus, translated by Tom Holland
“In Tom Holland’s vibrant translation, one of the great masterpieces of Western history springs to life. Herodotus of Halicarnassus—hailed by Cicero as the “Father of History”—composed his histories around 440 BC. The earliest surviving work of nonfiction, The Histories works its way from the Trojan War through an epic account of the war between the Persian empire and the Greek city-states in the fifth century BC, recording landmark events that ensured the development of Western culture and still capture our modern imagination.”