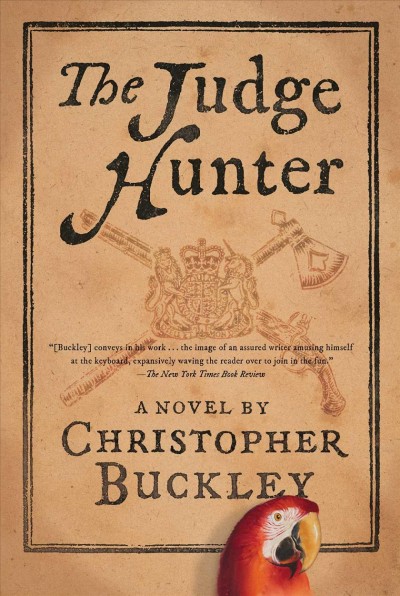 Sometimes you can judge a book by its cover. The cover was the main reason I picked up Buckley’s The Judge Hunter a couple of weeks ago. The parrot and the feel of the dust jacket just sucked me right in and it really paid off.

The Judge Hunter is set in 1664 after the English Civil War that saw the execution of Charles I. When Charles II, his son, is restored to the throne, goes looking for revenge. That is where Balthasar de St. Michel comes in. Known as Balty to his friends and family, our hero is completely inept and useless in every possible way. Then one day while trying to sponge off of his brother-in-law Samuel Pepys finds himself tasked to go to New England in search of two of the judges who signed Charles I’s death warrant.

Totally unprepared for this task Balty and suffering from acute sea sickness upon his arrival in Boston he is plunged into a complicated world he barely understands. Puritans in Boston in conflict with Puritans in New Haven. Puritans in both places out to get the Quakers who seem bent on their own destruction. And everyone hates and distrusts the Indians and the Dutch. On top of all that Balty soon suspects that his guide Colonel Hirum Huncks is up to his own nefarious ends.

This story takes the reading from colonial Boston, Hartford, New Haven and New Amsterdam. These chapters are interspersed with extracts from Samuel Pepys’s diary and chapters from his point of view. As with all Buckley novels it is interjected with much sardonic humor. Buckley is also a master at telling the audience what they need to know about a time period they know nothing about without it destroying the flow of the story.

In short this is a fantastic book for any reader of historical fiction.