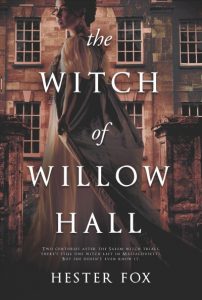 In the wake of a scandal, the Montrose family and their three daughters—Catherine, Lydia, and Emeline—flee Boston for their new country home, Willow Hall. The estate seems sleepy and idyllic, but a subtle menace creeps into the atmosphere, remnants of a dark history that call to both Lydia and Emeline. All three daughters will be irrevocably changed by what follows, but none more than Lydia, who must draw on a power she never knew she possessed if she wants to protect those she loves. For Willow Hall’s secrets will rise, in the end.

Do you ever read the summary of a book and think, “yeah, that sounds like something I would like”? That’s how I felt about The Witch of Willow Hall. Normally, though, books like this languish on my to-be-read list, something I can never quite find the time (or interest) to read once it’s been published. Months pass. Newer, more interesting books take precedence. I might eventually forget what the book was even about, only to re-read the summary years down the road and think, “meh.” And maybe (just maybe), I’ll take it off my TBR altogether.

Do not make this mistake.

I mean, yes, Hester Fox’s novel has its faults. Her characters can come off as overwrought and trope-y as hell: Catherine, the eldest sister, is not merely looking for marriage but scheming, using her hyper-sexuality to ‘trap’ an eligible bachelor. And Lydia – poor, good Lydia – is the naive ingenue who is ‘blinded’ to reality and compares their sororal relationship as a catty no-holds-barred competition for the affections of the mysterious and dashing John Barrett. Then there’s the plot, which falls somewhere between historical romance and gothic horror but doesn’t convincingly meld the two until more than half-way through. We think Lydia is the witch referenced in the title but is there someone else? Does Willow Hall itself hold supernatural power? (So ~spooky, y’all.)

But listen. I started this book not expecting much, and I was so thoroughly surprised and delighted at the end result. Read during a week when the turning weather felt especially serendipitous, I felt literally and figuratively cozy – surrounded by the whistling wind and dreams of a crackling fire as Lydia and John got swept up in their own romance. At first pass, Fox writes everything so harshly that part of me wondered why a character’s behavior had to be taken to such extremes, why there was no gray between the black and white. But then, chapters later, an impulsive action would be re-evaluated or a character’s motivations would be explained and I would think, “oh, that’s why.” (Some readers will probably love the way the plot trundles forward but then others may roll their eyes at the heavy-handed foreshadowing. To each their own.)

I don’t think I can fully explain why I enjoyed The Witch of Willow Hall so much, not even to myself. Maybe it was the way the plot seduced me and I could think of no better activity than to keep reading. Or maybe that the stakes felt real, or that the characters were given agency, or simply that Willow Hall was so vividly realized I felt like I could drive there and visit. Maybe it was the tense, gothic elements or the acute remembrance of being eighteen and feeling everything so forcefully: the lows abysmal but the highs astronomical. Perhaps it was everything together, the sum greater than its parts.

Early in the novel, Lydia tries to articulate her feelings for John Barrett. “Suddenly sitting here beside him is not enough,” she narrates. “The empty place that I didn’t even know I contained is aching with want, trembling with fear that it may never be filled.” Same, sis. Same.