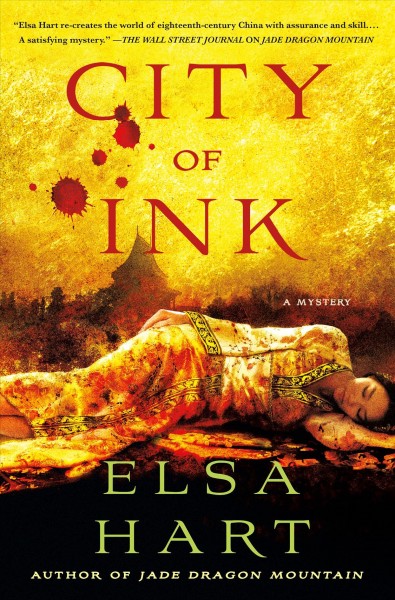 You may remember me mentioning Elsa Hart’s City of Ink a couple of months ago when I was reading the next installment of her Li Du Mystery series The White Mirror. City of Ink is the third book in the series and one that I approached with a little trepidation. What drew me to the series was the fact that the books were set in 18th century western China, Tibet and Central Asia. I love books that take place in and around the Silk Road and Harts ability to convey the setting was so perfect I ate them up. City of Ink is set in Beijing and I worried the book wouldn’t sustain my interest in the way the other two had. I need not have. Harts writing style and wold building skills make her novels captivating regardless of where they geographically take place.

Li Du, former imperial librarian, former exile, former traveler has returned to home. Ostensibly he works as a minor clerk in the office of one of the boroughs of Beijing’s outer city. In reality he is using his position to secretly investigate the arrest and execution of his former mentor and the reason for his own banishment. His duties as the assistant to the borough director seem to pull him away from this work when a woman and man are murdered in a tile factory and he and his boss investigate. Soon though the events of this murder, the execution of his mentor and his own banishment seem to become intertwined.

If you are a historical fiction reader who loves to immerse yourself in the place this is the book for you. Hart paints a detailed picture of the city of Beijing from its dusty bustling streets,of the outer city to the beautiful palaces of the inner city. Characters are well developed and mysterious. Besides Li Du, old favorites like Hamza, the enigmatic story teller and Li Du’s sidekick are also present.