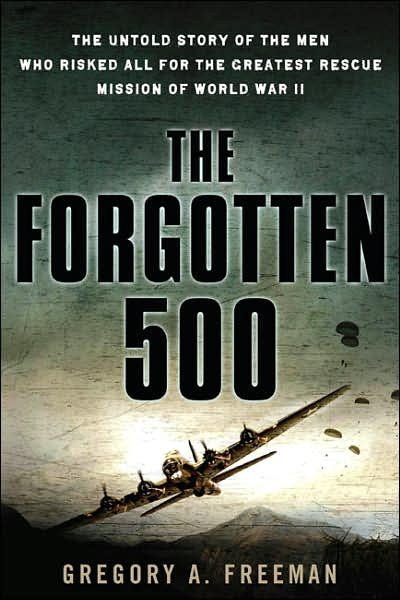 I’ve always been rather suspicious of stories that claim to be about something that was “forgotten.” Usually “forgotten” really means “not heard of by a lot of people because they didn’t really care until the book came along.” The Forgotten 500 falls into that category but its a story that was buried pretty far down.

A major but little known aspect of the World War II air war was the long range missions to bomb the oil field in Romania. These raids took off from either North Africa or Italy and attacked at low altitude. The oil fields themselves were defended by miles and miles of anti-aircraft batteries and squadrons of fighters. Not surprisingly casualties on the allied side were high. Often times planes returning from the raids damaged would find that they couldn’t get over the Carpathian mountains and the crews would have to bail out over what was then Yugoslavia. The ones that survived the parachute drop and weren’t captured by the Germans, fell into the hands of one of the resistance forces operating in the mountains. Over time large numbers of these downed airmen collected in the resistance camps and something had to be done with them. This is the story of the efforts of the Office of Strategic Services (OSS) the forerunner of the CIA to extract those downed pilots.

Much of the story is actually taken up with background. First you have to explain how the bombing operations took place and why they resulted in so many downed flight crews. Second you have to explain the complex history of ethnic groups and political groups that make up Yugoslavia. All of this is very interesting and very well done. Most readers probably won’t have heard about this unless they really get deep into World War II history.

My only quibble is that Freeman seems to have a political ax to grind. He generally paints the Chetniks, the resistance group that supported the royalists in Yugoslavia, are folk heroes and patriots who took in pilots out of the goodness in their hearts. However the communist partisans lead by Tito were evil and violent and part of a vast communist conspiracy to overthrow western democracy. From what I have read on the resistance movement in Yugoslavia neither side could really claim to be folk heroes and the willingness of the Chetniks to help the downed flyers was probably as much self-interest as it was nobility. You get the feeling reading this book that any second Freeman is going to start re-fighting the Cold War.

So I would say its an excellent book about that world of the Balkans in World War II and well worth reading but the reader will have to take the political slant with a grain of salt.