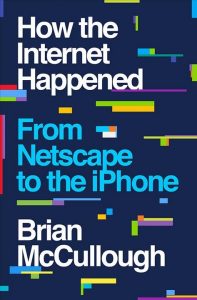 In How the Internet Happened, Brian McCullough chronicles the birth of the internet era for the first time, beginning in a dusty Illinois basement in the early nineties and ending with the introduction of the iPhone fifteen years later. Depicting the lives of now-famous innovators like Netscape’s Marc Andreessen and Facebook’s Mark Zuckerberg, McCullough reveals surprising quirks and unknown tales as he tracks both the technology and the culture around it. Cinematic in detail and unprecedented in scope, the result explores how the internet fostered disruption and innovation and helps redefine an era that changed every part of our lives.

In How the Internet Happened, author Brian McCullough covers “the Internet Era, that period of time from roughly 1993 through 2008 when computers and technology itself stopped being esoteric and started becoming vital and indispensable.” In choosing a very specific social moment (the Internet, capital I) and then narrowing it down even further (via a 15-year period), McCullough is able to craft a solidly-written micro-history which hasn’t yet been explored quite so succinctly. Each chapter is devoted to only a few years at a time, and McCullough further focuses and explains history through case-studies of well-known companies. (I’m sure you could just read select chapters, but the book is fun in its entirety.)

My favorite parts were those that focused on events of which I had no active memories; although I was alive in 1993 and got my first email in 1997/8, I don’t really remember anything pre-2000. Like, my family used AOL, but I had no idea that around 1995, ten dollars a month netted users only five hours of dial-up. Like, how do I even convert that into 2019 usage?? I probably spend five hours online a day. Also, learning that Netscape “pioneered…informal work culture” maybe only because its employees were men in their mid-twenties was fascinating. Like, do we as a culture associate a frat-house mentality with Silicon Valley start-ups because of Netscape or did HBO’s Silicon Valley take its aesthetic from Facebook… which took its own aesthetic from Netscape… whose employees were literally 23-year-old “post-college bros”?? McCullough’s chatty, accessible narration really only annoyed me in the book’s later chapters, possibly because I remembered exactly what he was writing about and thus didn’t need him to cover such minute details anymore. His use of “whore” as a verb was questionable, though. (As in “Today—however uneasily—it seems we’ve accepted the notion that “free” web services make their money by whoring out our personal information to marketers and advertisers.”) Like, dude, were their zero other options for the sentiment you wanted to convey??

Overall, though, How the Internet Happened was a veritable time machine back to my youth. It was my childhood, stationed in front of a tan HP desktop with a floppy disc drive and external speakers that attached to the side of the monitor (!!!), logging onto AOL and hoping nobody picked up the phone by accident. It was my lonely adolescence, holed up in my bedroom on DeadJournal and DiaryLand and LiveJournal writing god-knows-what into the ether. It was seeing people in my high school walking through the halls in-between classes listening to music on their iPod Photo and wanting one. It was being most excited for my college to hurry-up-already and send me my email credentials so that I could finally sign-up for Facebook after everyone in my high school had already done so.

Further reading: McCullough references a lot of sources in his notes, but the Internet History Podcast and The Innovators: How a Group of Hackers, Geniuses, and Geeks Created the Digital Revolution by Walter Isaacson sounded the most promising. (Also, Halt and Catch Fire because of feels.)