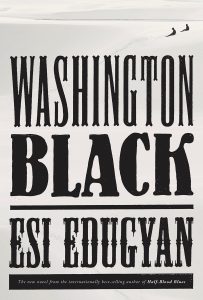 George Washington Black, or “Wash,” an eleven-year-old field slave on a Barbados sugar plantation, is terrified to be chosen by his master’s brother as his manservant. To his surprise, the eccentric Christopher Wilde turns out to be a naturalist, explorer, inventor, and abolitionist. Soon Wash is initiated into a world where a flying machine can carry a man across the sky, where even a boy born in chains may embrace a life of dignity and meaning–and where two people, separated by an impossible divide, can begin to see each other as human. But when a man is killed and a bounty is placed on Wash’s head, Christopher and Wash must abandon everything. What follows is their flight along the eastern coast of America, and, finally, to a remote outpost in the Arctic. What brings Christopher and Wash together will tear them apart, propelling Wash even further across the globe in search of his true self. From the blistering cane fields of the Caribbean to the frozen Far North, from the earliest aquariums of London to the eerie deserts of Morocco, Washington Black tells a story of self-invention and betrayal, of love and redemption, of a world destroyed and made whole again, and asks the question, What is true freedom?

Wash’s life unfolds in four acts set in four different locations—an effective structure that lends the novel the feel of a travelogue. The first act, set in Barbados, introduces the reader to an eleven-year-old boy whose narrative voice is heartbreaking, informed as it is by a lifetime of fear and the inevitability of pain. The reader rarely bears witness to the acts of brutality inflicted upon the plantation’s slaves, more often than not hearing about the horrific violence from characters after the fact or seeing it reflected in varied wounds and scars and limps, but there are moments, seemingly small, that turn a light on the deep physical and psychological scars left in its wake. One such moment for me: Wash, having been taken on as Christopher’s assistant, is navigating a mountain’s steep slope when he loses his footing and falls. His very first thought, his very first action, was to hold up the leather case he was carrying for Christopher’s inspection, so the man could see and be assured that it was undamaged. Fear might as well have replaced the blood in Wash’s veins as he braced for the punishment sure to follow close on the heels of that accident. His own well-being? It didn’t occur to him to take it into account.

Acts two through four establish a kind of parallel track between Wash’s life and Christopher’s, with the divide running through the center still being significant—a matter of race, class, privilege. Both men make choices that impact the people closest to them; both choose to pursue dreams of scientific achievement, and react in a similar fashion when it seems clear their efforts will not be received or rewarded as they’d wish them to be. Both bear physical and emotional scars that sets them apart from others. They are both bright, each in their own way (and for their own reasons) driven, and fallible.

The thoughtful, imagery-rich style of writing is wonderful throughout, so much so that I often stopped to re-read single lines, paragraphs, sections of dialogue. That said, I’ll admit to preferring the first half of the novel to the second. The push-pull of the relationship that develops between Wash and Christopher, the sliver of kinship they found in the joy that came with discovering and cataloging the natural world, gripped and held me close. That first half also contained a hot air balloon, a storm-lashed night over the ocean, twin brothers as a ship’s captain and doctor, respectively, the frozen north (fitting, considering our current climate), and, again, Wash’s young and painfully earnest voice.

It really is no wonder Washington Black was met with critical acclaim.