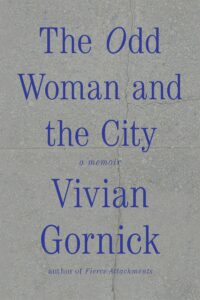 About The Odd Woman and the City:

“A memoir of self-discovery and the dilemma of connection in our time, The Odd Woman and the City explores the rhythms, chance encounters, and ever-changing friendships of urban life that forge the sensibility of a fiercely independent woman who has lived out her conflicts, not her fantasies, in a city (New York) that has done the same. Running steadily through the book is Vivian Gornick’s exchange of more than twenty years with Leonard, a gay man who is sophisticated about his own unhappiness, whose friendship has “shed more light on the mysterious nature of ordinary human relations than has any other intimacy” she has known. The exchange between Gornick and Leonard acts as a Greek chorus to the main action of the narrator’s continual engagement on the street with grocers, derelicts, and doormen; people on the bus, cross-dressers on the corner, and acquaintances by the handful. In Leonard she sees herself reflected plain; out on the street she makes sense of what she sees.”

Gornick’s life experience is of course not universal, but I found resonant notes scattered throughout, and considered the time I put into peeling back layers of thought and insight to see where she and I converged and departed well spent. As this slim memoir is an exploration of the city, its boroughs and blocks, and of the myriad pitfalls and pleasures of friendship, it might be best to keep in mind that the questions Gornick poses across the pages are not resolved. I can’t imagine they’re meant to be, or that there is a tidy answer to be had.

After finishing this title, I moved on to another one of Gornick’s books, The Situation and the Story: The Art of Personal Narrative, which nicely complemented The Odd Woman and the City.