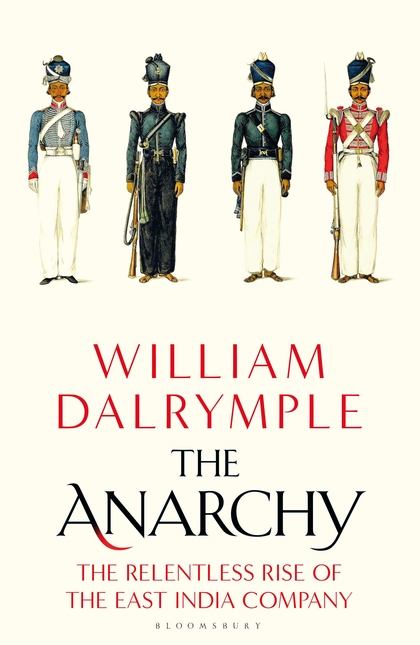 Writing histories of the British East India Company (EIC) is hard. First of all what is it? Its a multi-national corporation, its a business with governmental authority over a large portion of the Indian subcontinent , it has its own military, and navy. All of it headquartered in Leadenhall street in London. Secondly it has a really long history. Founded in 1600 it isn’t fully shut down until 1874 (although it had basically stopped functioning in 1858). The answer? You break it down into its parts and look at them separately which is what Dalrymple’s The Anarchy does.

Specifically he focuses on the period in the 18th century when the EIC evolved from being just a company trading goods between India and England to a multi-national corporation with governing powers including taxing, minting money and military over much of the subcontinent. Dalrymple presents it as a confluence of events. The Mughal empire which had ruled India for a couple of centuries was falling apart. At the same time the EIC which was just a trading company began increasing its military presents to meet the threat from France in an extension of many Anglo-French wars of the 18th century. When that military wasn’t needed to fight the French it was rented out to local warlords fighting over the scraps of the Mughal empire. It was only a matter of time before the EIC decided that they were better off using their army to take over rather than help out local warlords.

This culminated in the Battle of Plassey in which Robert Clive defeated the last Nawab of Bengal giving the EIC governing authority over all of Bengal. The company then proceeded to tax the living daylights out of Bengalis which, along with a drought, caused a famine in Bengal that is estimated to have killed 10 million of the inhabitants. It also set up the EIC for its later moves into the trade of opium to China and the Opium Wars that resulted.

Dalrymple takes you through every step of this excruciating and depressing process. He also gives you a worts and all view of its may characters. Clive the “hero of Plassey” is presented as a mean spirited and mentally unbalanced bully. While the early leaders of the EIC look little better than pirates. He also does an excellent job incorporating Indian sources into the book. It is a gripping story if not a happy one and a must for anyone into the British Empire or Indian history..