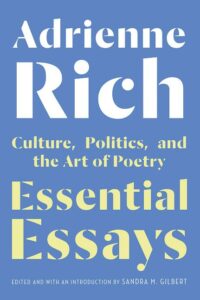 Rich wrote several of these essays across the sixties and seventies and it is striking how the themes within each still weigh heavily on our collective consciousness. Her approach throughout, no matter the topic, is frank and unflinching, underlined by an awareness of the place of privilege from which she wrote. As the collection progresses, there is a certain sense of entrenchment, a digging in of heels. Such strength of conviction can be divisive, it can be rousing, while in me it prompted contemplation, a renewed striving for shared and differing points of view.

I sought out this collection primarily for Rich’s insight on poetry—form, function, and everything in between—and there she did not disappoint: one of my favorites, the essay that I go back to more often than not, is “Vesuvius at Home.” Written in 1975, the essay looks at Emily Dickinson through a lens that Alena Smith, the creator of Dickinson, might have at least peeped through prior to conceiving (or while she mulled over) the show’s concept. Emily Dickinson, Rich believed, was “a great psychologist; and like every great psychologist, she began with the material she had at hand: herself. She had to possess the courage to enter, through language, states which most people deny or veil with silence.” I haven’t shaken those words since encountering them, and in fact went back to Dickinson’s poetry with an eye made keener by the sunlight on that slant, this fresh (to me) take on the woman and her work. 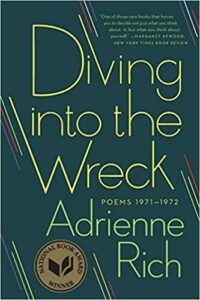 “In her seventh volume of poetry, Adrienne Rich searches to reclaim―to discover―what has been forgotten, lost, or unexplored.

“I came to explore the wreck. / The words are purposes. / The words are maps. / I came to see the damage that was done / and the treasures that prevail.” These provocative poems move with the power of Rich’s distinctive voice.”