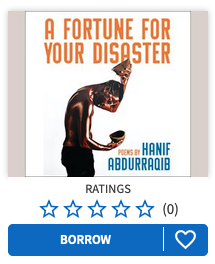 “In his much-anticipated follow-up to The Crown Ain’t Worth Much, poet, essayist, biographer, and music critic Hanif Abdurraqib has written a book of poems about how one rebuilds oneself after a heartbreak, the kind that renders them a different version of themselves than the one they knew. It’s a book about a mother’s death, and admitting that Michael Jordan pushed off, about forgiveness, and how none of the author’s black friends wanted to listen to “Don’t Stop Believin’.” It’s about wrestling with histories, personal and shared. Abdurraqib uses touchstones from the world outside-from Marvin Gaye to Nikola Tesla to his neighbor’s dogs-to create a mirror, inside of which every angle presents a new possibility.” 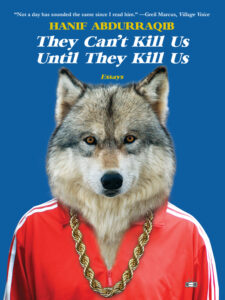 I also recommend Abdurraqib’s essay collection, They Can’t Kill Us Until They Kill Us, which is available as an ebook through Overdrive. The clarity of his writing is knife-sharp, penetrating. I spent several days dipping in and out of this collection and was sad/sorry to see it come to its inevitable end (but then I went and got myself a copy of Go Ahead in the Rain in order to again immerse myself in his writing and in discovery of aspects of life far different from my own).

About the essay collection:

“In an age of confusion, fear, and loss, Hanif Abdurraqib’s is a voice that matters. Whether he’s attending a Bruce Springsteen concert the day after visiting Michael Brown’s grave, or discussing public displays of affection at a Carly Rae Jepsen show, he writes with a poignancy and magnetism that resonates profoundly.

In the wake of the nightclub attacks in Paris, he recalls how he sought refuge as a teenager in music, at shows, and wonders whether the next generation of young Muslims will not be afforded that opportunity now. While discussing the everyday threat to the lives of black Americans, Abdurraqib recounts the first time he was ordered to the ground by police officers: for attempting to enter his own car.

In essays that have been published by the New York Times, MTV, and Pitchfork, among others—along with original, previously unreleased essays—Abdurraqib uses music and culture as a lens through which to view our world, so that we might better understand ourselves, and in so doing proves himself a bellwether for our times.”