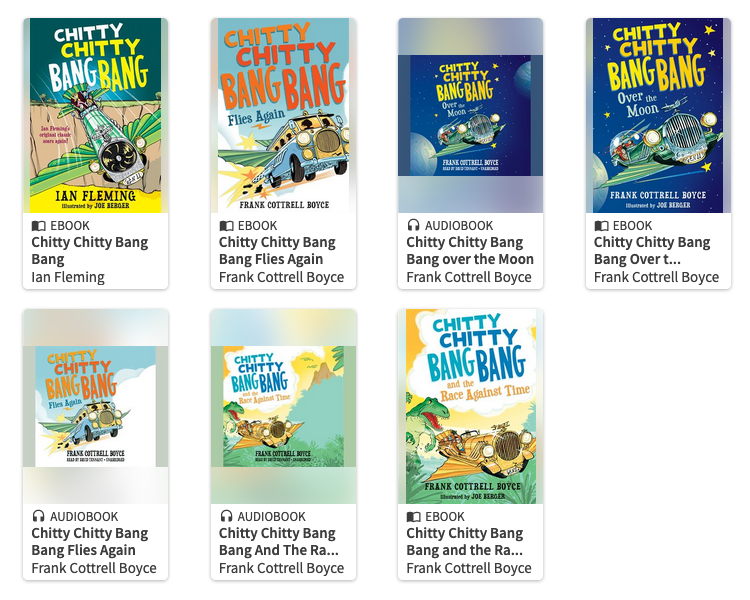 Whether or not you’re familiar with Ian Fleming’s original Chitty Chitty Bang Bang story you can still dive right into Frank Cottrell Boyce’s follow-up series, which was given the seal of approval by Fleming’s estate: “’They’re incredibly protective of the car but they quite liked the idea of starting all over with a completely new cast of characters. It made Chitty more central in a way,’ Boyce said.”

While I enjoyed the series’ story arc and adored the quirky characters introduced across the pages, it was David Tennant’s* narration that made the experience a truly delightful one. The writing is often humorous, but it was Tennant’s delivery that on several occasions caused me to laugh out loud. (His voice for Count Zborowski is *chef’s kiss*.) If you’re looking for a series to entertain the whole family, kids and adults alike, here you go. This is it. And the three audiobooks are available on Hoopla!

*David Tennant as in Doctor Who. As in Good Omens and Broadchurch. That David Tennant. Tip: Keep listening after the story’s conclusion for interviews with David Tennant, in which he discusses the process of recording an audiobook, his favorite bits in the Chitty series, and more.

“Buckle your seat belt for the first ever follow-up to Ian Fleming’s only children’s story.When the Tooting family finds an old engine and fits it to their camper van, they have no idea what kind of adventure lies ahead. The engine used to belong to an extraordinary car, and it wants its bodywork back! But as the Tootings hurtle across the world rebuilding the original Chitty, a sinister baddie is on their trail-one who will stop at nothing to get the magnificent car for himself. Fueled by wry humor, this sequel to the children’s classic by the creator of James Bond-featuring a contemporary family and a camper van with a mind of its own-is written by bestselling, award-winning author Frank Cottrell Boyce.”